A safety issue along the riverfront path 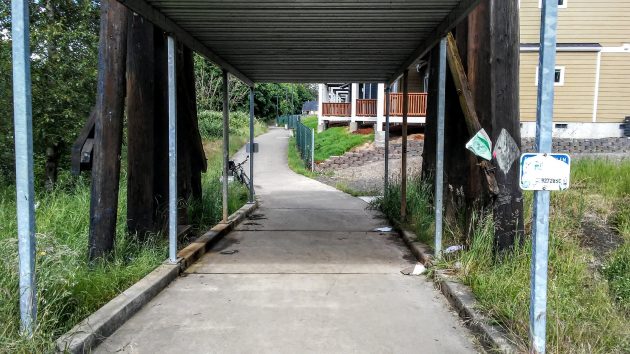 A CARA board member was accosted here, where the Clark path goes under the Lafayette Street trestle.

Security is one of the subjects that will need attention as Albany contemplates adding various enhancements to the Dave Clark Path and other public property along the Willamette Riverfront.

What happened to Maura Wilson illustrates the issue. She’s a member of the advisory board of the Central Albany Revitalization Area, the downtown urban renewal district that intends to spend millions on riverfront changes.

About two weeks, she told the CARA board Wednesday night, she was riding her bike on the Clark Path to the Willamette Community Garden at the end of Main Street, where her husband was waiting.

Where the path goes under the trestle, she said a disheveled-looking man, also on a bike, swerved in front of her, spit at her and shouted an insult. She rode on but could not avoid going through the mist of spittle. Afterward, she called the police but was told nothing could be done unless she could state that the spit had hit her. And of that she could not be certain. But she’s had to be tested for hepatitis. And she’s not riding her bike on that path again by herself.

It is not unusual to encounter people in various mental states on the riverfront path, some of them apparently under the influence. Some live in the brush on the riverbank. And judging by the tobacco smoke drifting up from below, some spend time in a cave under the path east of the Wheelhouse parking lot.

The path is on one of my bike routes, and I’m on it often. I’ve never had a problem with anyone, though recently it was a little tricky to get around a woman who was dancing from one side of the path to the other and shouting — maybe singing — at the top of her voice.

The conventional wisdom used to be that the more the general public uses a place, the less there are problems with undesirable behavior. That no longer seems to be true. But even if it is, how do you get the general public to frequent a place that acquires a bad reputation?

As CARA and its consultants continue kicking around ideas for Albany’s Willamette Waterfront Project, this question will hang in the air: What if we spend a few million dollars to add river views and art displays and whatnot to the Dave Clark Path, and then people don’t go there because it isn’t reasonably pleasant or safe? (hh) 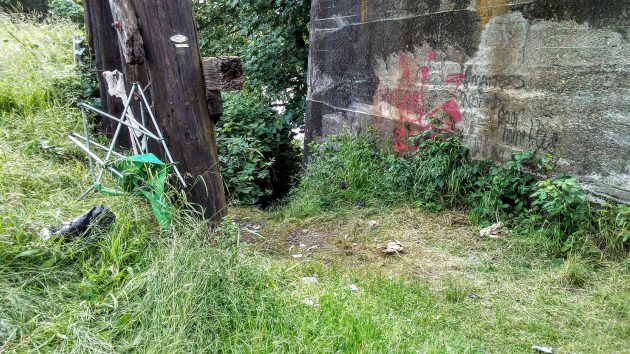 Trampled weeds and trash mark a hangout off the riverfront path under the trestle.


11 responses to “A safety issue along the riverfront path”