A road tax on new bikes 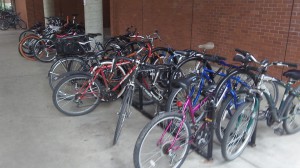 Nobody likes more taxes, but as someone who often rides a bicycle on public roads, I would not mind as modest bike tax that goes into the state highway fund.

This idea has been kicking around for years, and Colorado is said to have just such a tax. Now, according to a report in the Oregonian, a committee of the City Club of Portland is recommending a 4 percent excise tax on the sale of new bikes in Portland. But to me, this would make more sense statewide.

The main point of an excise tax would not be to raise a lot of money for bike facilities on public streets, although it might contribute at least a little on that front, In terms of road damage, bicycles cost the road system virtually nothing.

The main point of such a tax would be to counter the argument that bicycle owners get a free ride on our roads. They don’t actually get a free ride. Most are fuel buyers and thus road-tax payers, along with being income and property taxpayers. But now and then they still get the complaint.

Other forms of bike taxation, like an annual registration, are impractical. But a small excise tax on new bikes for adults, or on bike equipment like tires, could work. It would give cyclists tangible proof that they pay a road tax too. (hh)

Albany Councilman Rich Kellum responded: I agree a continuing license would be problematic without a bureaucracy to look over it. Instead a tax I would like a one-time purchase of a sticker for, say, $15 for all bikes. It is true that bikes do almost no damage. It is also true that millions are spent for bike paths. How much will the path between Corvallis and Albany cost?