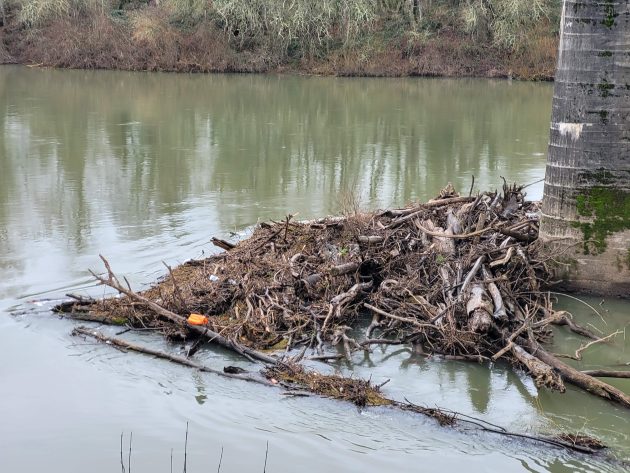 The pile of logs and other debris under the Albany railroad bridge on Saturday, Jan. 21, 2023.

As you would expect, the pile of trash, logs and smaller bits of driftwood under the Albany railroad bridge on the Willamette River is getting bigger this winter.

On a bike ride along the Dave Clark Riverfront Path in a cold drizzle on Saturday, I took a look at the pile from the bank under the bridge. Once again I’m wondering how big the pile is going to get before somebody does something to dislodge it.

Since I last took note of this phenomenon along my riverfront beat last September, the pile has grown by about one-third its former size. And clearly, this pile is not going to go away by itself.

High water is not enough to float this mess and carry it downriver. Instead, more stuff washes up here when the river runs high.

This probably doesn’t matter, especially now when there’s little boating on this stretch of the Willamette. But next summer, people floating downriver on tubes or in canoes and kayaks will want to take care not to get caught here.

If the current pushes their craft into this debris, it likely would be hard for people to get loose.

The last time I inquired, the Oregon State Marine Board showed little interest in this potential hazard to river navigation, except to say that if it does become a problem, it would be up to the party responsible for the bridge to get rid of it.

In 2012, the Portland & Western Railroad paid to have a similar logjam removed from the center pier of the bridge. Whether the railroad eventually takes care of this one, on the pier closest to the right bank, we’ll just have to wait and see. (hh) 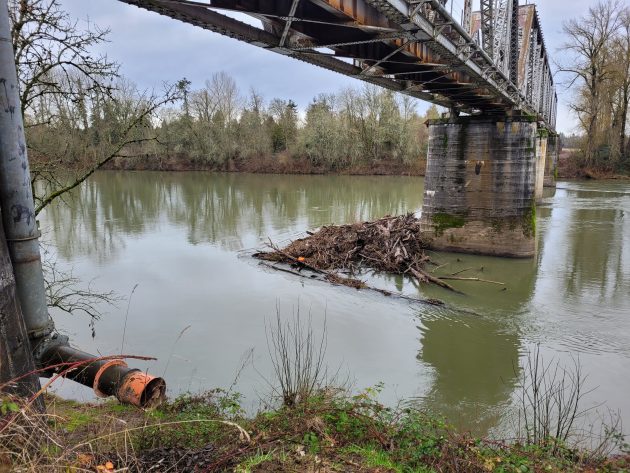 
5 responses to “A riverfront update: Look at that log pile”