A rebellion? It’s about time … 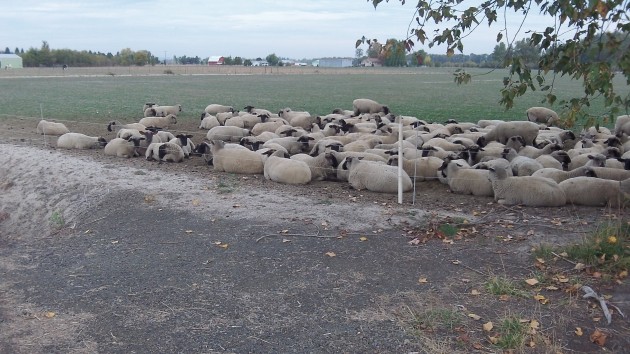 These sheep resting near Albany have no more chance of rebelling against the time change than we.

We act like subjects, you and I, and as if to rub it in, on Sunday the system we live in forces us once again to adjust the time we go by. Standard time returns Nov. 1, and we’re expected to hop to it and fall in line. Time for a little rebellion, wouldn’t you think?

The trouble with rebellion is that it takes more than a few of us to make it work. You and I can refuse to turn the clocks back and go on as though nothing had happened. We’d show up an hour early for everything that’s set to begin at a certain hour. We’d turn on the nightly network news on Channel 9 and end up looking at Judge Judy. And waiting an hour for a meeting to start just prolongs the pain of having to sit through it.

The fact that the country still has daylight savings time during the summer, or only during the summer, tells you something about apathy and the sorry state of democracy. In a society where people really had an interest in and collective influence over policies, this exercise of changing the clocks twice a year would have been abandoned long ago, probably right about the time automatic transmissions came in for cars.

In modern life, daylight savings time saves nothing, no electricity, no fuel and certainly no time. But it’s kind of nice to have those long evenings of daylight. So a sensible country would have long ago decided to set the clocks ahead an hour and keep them there. Children would have to make their way to school in the dark from fall to spring. So what? Nothing wrong with letting the little ones know that hardship is a part of life.

But no, we go through this rigmarole twice a year, throwing off the rhythm of life for millions, harming productivity and causing a form of jet lag and probably even a few extra accidents and deaths. Why do we put up with it? Because we’re too sheep-like to refuse to go along. (hh)