A question of speed: Legal versus prudent 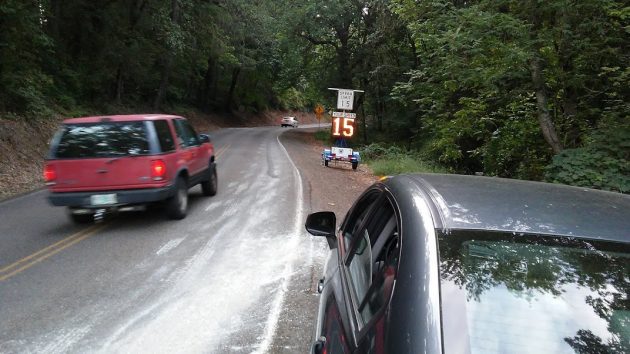 No, the speed limit in the curves of Scenic Drive in North Albany is not 15 miles an hour, no matter what it says on top of the feedback sign that was there on Monday.

A reader asked about this, and I checked with the experts, namely Ron Irish, the Albany transportation systems analyst, and Benton County Engineer Laurel Byer.

Scenic Drive, though inside the western city limits of Albany, is a county road. And on the curvy section heading up the hill from Highway 20, there is no “speed order” in effect. That means that the basic rule controls. “While that is typically 55, it really is a speed that is safe and prudent given the road and weather conditions,” Byer wrote.

And clearly 55 is neither safe nor prudent there, or even possible. If you tried it you’d fly off the road in those curves.

There are advisory signs, though, suggesting 15 mph. That’s “considered the speed one can, in regular dry conditions, safely travel the curve,” Byer told me in her email. “It is not a limit, however, so a deputy could not ticket someone going faster than the advisory speed unless they are being reckless and endangering others.

“It is a little misleading to have the speed feedback sign state the speed limit is 15 mph,” she added. “That simply isn’t true.”

Regardless, these feedback signs usually are placed in response to neighborhood complaints about speeders on particular streets. We can assume some people have been going through there in too much of a hurry. So let’s hope the temporary display accomplishes what the advisories could not. (hh)


5 responses to “A question of speed: Legal versus prudent”