A ‘pub talk’ about smart meters 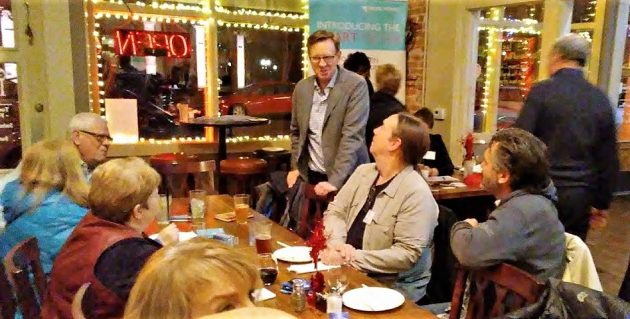 Pacific Power picked Independence to launch its Oregon conversion to “smart meters” because the town in Polk County is striving to be a tech-savvy place. I went there Tuesday night to take in an event the power company put on, and I learned a couple of things.

It was billed as a “smart tech pub talk” led by Scott Bolton, a senior VP of Pacific, and Stefan Bird, president and CEO of the Portland-based utility. Bolton talked about Independence’s efforts to grow its economy based on technology, a theme that’s in line with Pacific’s smart meter program.

Bird talked about the company’s need to modernize the metering system as an “intelligent network” to match the requirements of the coming “smart grid,” in which consumption of electricity has to be closely and quickly aligned with various new generating sources to a greater degree than ever before. One benefit is lowering the cost of operating the grid. That, anyway, is what I got out of his remarks.

The two new details I learned from Mike Cochran, the managing director of the company’s metering business. They are that Pacific expects to spend around $117 million on the smart meter program, and that the conversion will mean the elimination of about 110 meter-reading jobs, out of a companywide work force of about 5,000 in six states. To the extent possible, people affected will be absorbed in other jobs within the company.

The new meters are two-way radios that transmit consumption data and allow the utility to respond if necessary. For example, the company could remotely shut off power for nonpayment without having to send someone to the address.

For customers, the main benefits being cited are that the utility will be able to instantly detect power failures, and their extent, enabling repairs to be started faster, and that customers can monitor their power use hour by hour and respond accordingly if they want. People can also set an upper target for their bills and be notified when the bill gets close.

Installation of the meters will start in Lebanon on Feb. 19, the company has said. The starting dates are March 5 in Sweet Home, March 26 in Albany, and April 23 in Corvallis.

The wireless network making the meters possible will consist of small boxes to receive and transmit signals. They’ll be mounted on existing power poles, and no new poles are contemplated.

As for radiation, the company says 70 million smart meters are in use across the country and no health effects have been documented. The amount of exposure over 20 years is said to the same as a 30-minute cell phone call, minuscule compared to all the electromagnetic signals already out there.

Pacific customers can expect to get letters about the installation ahead of time, and then a phone call a few days before. Technicians will announce themselves when they come, and the installation itself will require an outage of about five minutes. The following month, the company plans to have someone read the meter in person to make sure everything is working. After that, it will be done remotely, and customers can check on their power use online. (hh) 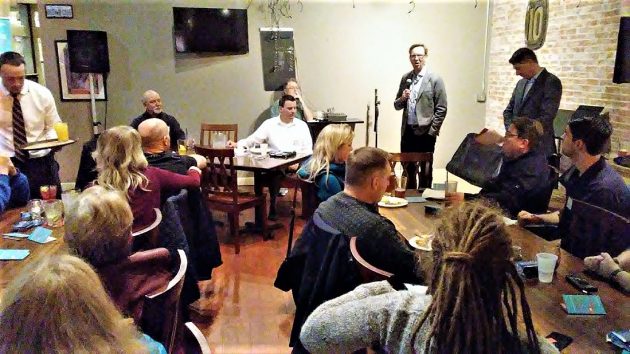 Bird said an intelligent network of smart meters is necessary for the power grid of the future.

13 responses to “A ‘pub talk’ about smart meters”