A potential danger? Not really 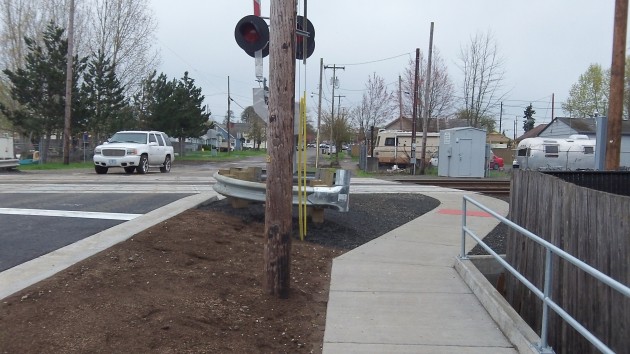 Take a look at this railroad grade crossing, newly rebuilt and opened last week on Albany’s Main Street S.E. When I went by there on March 28, the day the crossing was reopened, the alignment of the new sidewalk struck me as unusual. It goes around the gates, so when the arms are down the sidewalk stays open.

This arrangement struck me at first as an invitation to pedestrians to cross the tracks even when the lowered gates and flashing lights — not to mention the ringing bell — signal an approaching train. But as it turns out, this is not unusual at all, which I realized when I looked at other grade crossings in the neighborhood and inquired with ODOT Rail. 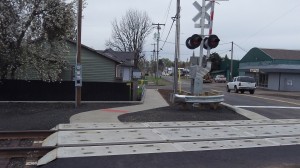 Rick Shankle is the manager of the Crossing Safety Section with ODOT’s Rail & Public Transit Division. He was kind enough to respond to my email, and he wrote: “ODOT’s standard is to put sidewalks behind the signal mast, opposite the gate arms (as shown in the photo). Gate arms for vehicles are set at a different height than for pedestrians.  Standard gate arms are easy for pedestrians to circumvent, and any modification to the gate arms that would reduce the potential for circumvention, increases the potential for trapping pedestrians on the tracks between gate arms.  Sidewalks and pathways are bi-directional, and in the instance at Main, the signal masts are currently set in the vehicle approach quadrants (NW and SE) of the crossing, so if the sidewalks were constructed in front of the signal mast, there would be no gate arms in the other quadrants (NE and SW), to restrict pedestrian access.  It would require a four quadrant system to put gate arms on both sides of the track, and on both sides of the road.”

I had not paid much attention to walkways at rail crossings, maybe because at many crossings around here there are no sidewalks at all. Only the brand-new construction at this one, complete with a railing, pedestrian warning strip and the curve around the signal mast, made this one stand out.

Indeed there was no sidewalk here before, and there still is none on the other side of the street. It is not to be considered a reflection on Albany that it has a “Main Street” without sidewalks, but the misnaming of this street is a subject for another time when the news is slow. (hh)

2 responses to “A potential danger? Not really”