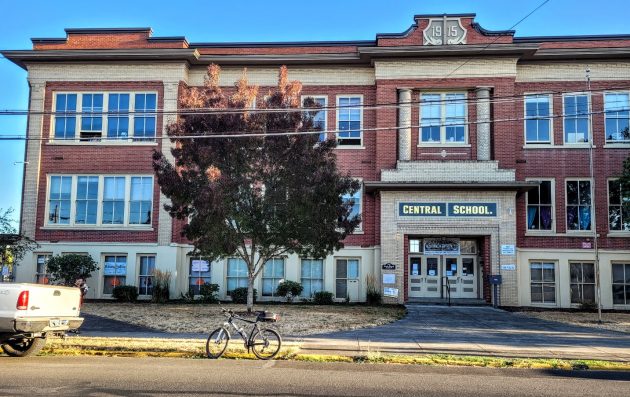 The front of Central School, photographed on Tuesday evening.

A surprising development popped up during Monday’s meeting of the Albany School Board: There’s a plan to close Central School as an elementary school and use it for other district programs.

I happened to come across the YouTube video of the board meeting and, with time on my hands, watched for a while. The video is badly made — one stationary camera far away, with some participants hidden by others — and everybody is wearing masks, so it’s hard to tell who’s saying what.

The upshot, though, is this: The Greater Albany Public Schools are getting or have received $15.7 million in federal grants to help deal with the effects of the Covid pandemic. The district administration wants to spend $10.2 million of that on adding eight classrooms to South Shore and six to Takena grade schools.

For several years now, Takena and Central have been paired. Children in kindergarten through second-grade attend Takena, and Central has the third through fifth grades. About 120 children attend each building.

The six rooms to be added to Takena would be enough to house all the children now attending Central.

Board member Roger Nyquist pushed back on the idea, which he said had not been made public before Monday night. He recalled that at a meeting a few years ago on splitting the grades between the two buildings, he and Albany Councilman Dick Olsen were told that move was not a precursor to closing Central. He wondered when the board’s word was no longer good.

Also, Nyquist wants to be sure the federal Covid-related grants are spent first to try to overcome whatever learning loss has been caused by the pandemic, not on capital projects.

But he also said the South Shore addition of eight classrooms was an important step that should move forward separately, preferably from different funds. It’s to replace modular rooms with a design life of 20 years that have been there for 30.

There was no vote. But the discussion will continue. Board members seemed to agree that the first thing should be to have meetings with parents in the Central and Takena areas.

Designed by famed Albany architect Charles Burggraf, Central was built in 1915. It’s been upgraded in recent years to make it more earthquake resistant. In 1980, Olsen single-handledly prevented the school board from closing the school when he produced architectural drawings proving that the building’s floors were anchored to the walls. (hh)

The Albany School Board as it appeared on a video of its Monday meeting.


12 responses to “A plan to close Central Elementary School”