A patchwork of pot laws likely 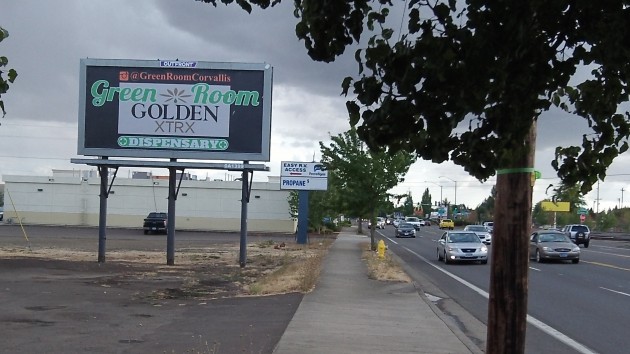 This billboard on Pacific Boulevard in Albany advertises a Corvallis pot dispensary.

It’s becoming apparent that Oregon will end up with a patchwork of local marijuana laws, thanks to the 2015 legislature, and one likely effect is more driving around by users looking to legally buy recreational weed.

The legislature passed HB 3400, which gives cities and counties authority to take exception to some of the provisions of Measure 91, approved last November. The measure legalized the recreational use of marijuana by adults and set up a procedure for licensing retail stores by the Oregon Liquor Control Commission. Under HB 3400, local authorities can’t make it illegal again for adults to use recreational marijuana, but they can at least try to prohibit its cultivation, processing or sale. In Linn and Benton counties, any ban would be subject to a referendum in November 2016, but until then the ban would be in effect.

So far, 16 small Oregon cities and six counties have notified the liquor commission that they are banning licensed recreational marijuana producers, processors, wholesalers and/or retailers. As of Sept. 3 the list included the cities of Brownsville and Sweet Home in Linn County.

The Brownsville and Sweet Home bans — covering production, processing and wholesale and retail sales — will go to the voters in the 2016 general election. That’s because Linn County voters disapproved of Measure 91 by less than 55 percent. If the no votes been 55 percent or more, the councils could impose the bans on their own.

The Lebanon City Council plans to discuss possible marijuana action on Sept. 9. Last spring it voted to deny city business licenses to marijuana stores, effectively banning them, but it’s unclear — at least to me — whether that too would be subject to a referendum next year.

In Albany, Assistant City Attorney Sean Kidd recently gave the council a briefing on its options under the new law, but so far no action has been proposed.

Benton County approved of Measure 91 by an overwhelming 60 percent, and it’s unlikely that Corvallis would try to restrict marijuana retail stores. So here’s an unsettling prospect: If Lebanon enacts a ban on recreational sales and the Sweet Home and Brownsville bans remain in effect, the already heavy traffic on Highway 34 will be further augmented by at least some recreational users on their way to replenish their supply of weed. (hh)


6 responses to “A patchwork of pot laws likely”