A note of warning: This is LOUD

This, in case you can’t tell, is the sight and sound of a pile driver in action. And if you live or work nearby, you might want to try to spend the next several weekdays somewhere else.

On Monday, a pile-driving crew started work at the site of a planned sewer lift or pump station on Albany’s Dave Clark Path. The lift station is a crucial part of a $7.2 million sewer construction project.

Last week, City Engineer Staci Belcastro sent word that the contractor, Pacific Excavation would do the pile-driving from 7 in the morning until 6 at night Monday through Friday, and the contractor expected this part of the job to take about two weeks.

Albany Public Works had notified residents of the nearby Ironworks Townhouses and people working at the Wheelhouse by email last week last week. They said the contractor also went door to door on Friday.

The city added this cautionary note: “Pile drivers are very loud and the impact from the hammer that’s dropped on the pile will cause the ground to shake.”  No kidding.

That section of Water Avenue is closed while the pile driving is going on. And the Clark Path near the Wheelhouse office building is closed for the duration of the construction, which will take several months. (hh) 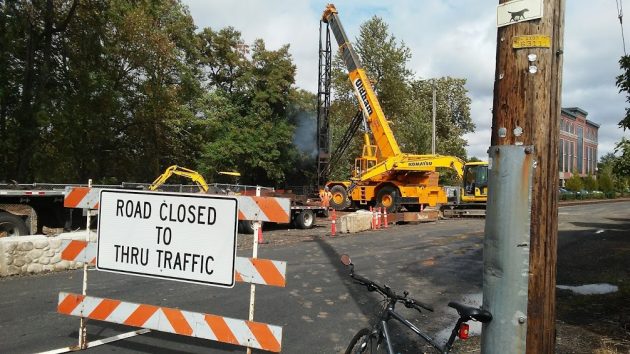 A puff of smoke as the hammer connects …

One response to “A note of warning: This is LOUD”