A night-time rescue — where it happened 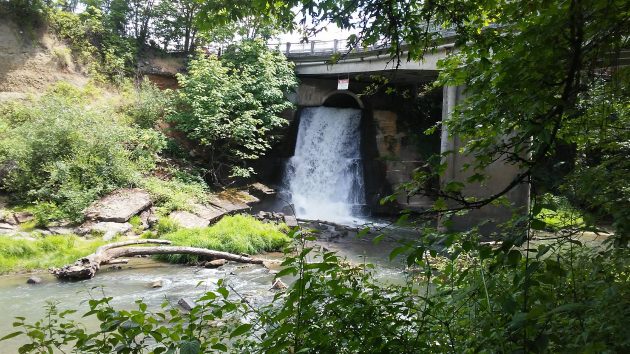 It’s a long eway from the sign under the bridge to the boulders in the river below.

Today’s report by the Albany Fire Department of an unusual night-time rescue made me go take a look at the place where it happened, under the Third Avenue bridge across the Calapooia River and the waterfall on the Albany-Santiam Canal.

After midnight this morning, the fire department said, police and rescue crews responded to a 911 call that a woman was clinging to a sign suspended under the bridge, screaming. The woman, later identified as a 47-year-old Albany resident, was distraught, obviously, and officers talked to her for about an hour while the fire department went into action for what it called a technical rescue.

The crew launched a rescue craft on the Willamette and brought it up the rock-studded mouth of the Calapooia, not a mean feat during daylight, let alone around 1 in the morning. Meanwhile a firefighter went over the bridge railing and managed to attach a harness to the woman. Firefighters and officers then hauled up the bundled pair, over the railing to safety.

She was checked for injuries — apparently she had  none — and the police interviewed her for possible future action, according to the report.

No word on how she got down to that sign, but it must have been some feat. And she likely would have died from the fall or drowned if she had not been able to hang on until the rescuers pulled her up.

The sign says: “Spillway water release will create sudden waterfall. Keep back 250 feet.” This time of year, it’s hardly necessary. With the Albany hydropower generator shut down because of low water in the Santiam River, the canal water cascades down to the river all the time.

Underneath the bridge, the space is marred by trash and plenty of spray paint. A well-trodden path leads there from the access road to Bryant Park. There was nobody there when I checked today. But whoever the regulars are, maybe the “sudden waterfall” warning is intended for them. (hh) 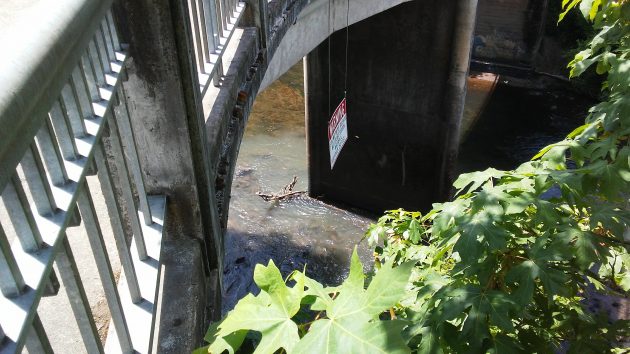 You have to lean over the railing to see the waterfall warning from above. 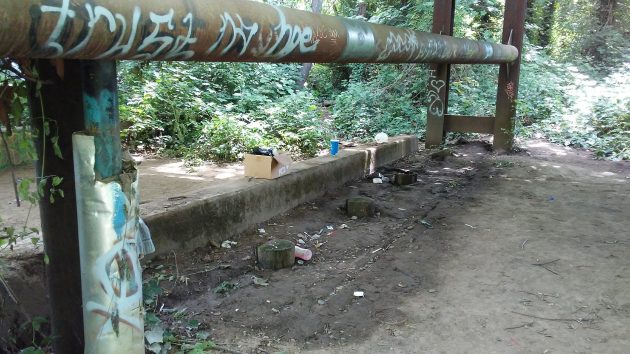 Under the Third Avenue bridge early this afternoon.


2 responses to “A night-time rescue — where it happened”