A night in local politics 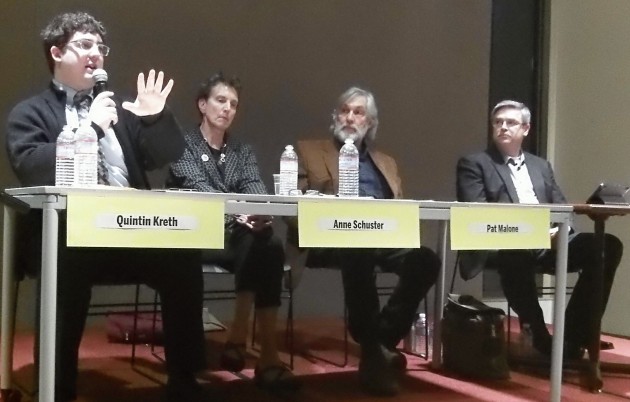 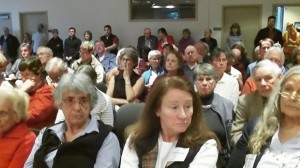 Part of the crowd…

They had to haul out extra chairs, and even then not everyone found a seat. Except for the fact that this was the meeting room of the Corvallis Public Library on Monday night, you would have thought the crowd had come to see a hot new act. Instead, what they came for was a forum featuring four candidates for Position 1 on the three-member Benton County Board of Commissioners.

And what they got was pretty much the usual stuff from candidates for local office: Yes, they support road maintenance and money would have to be found;, though they weren’t sure where; yes, they’d favor various steps to boost the economy, and yes, they all were for collaboration with other local governments for the common good. And by the way, they’re against workplace bullying in case it ever comes up.

There they were: three Democrats competing for the party nomination to succeed retiring Linda Modrell on the Benton board: Quintin Kreth, 20, of Alpine, who made a point of his age and has graduated from the University of Oregon with degrees in math and public administration; Anne Schuster, a member of the Corvallis School Board and lots of other committees; and soft-spoken Pat Malone, a tree farmer in Kings Valley. And off to the right, the lone Republican running for the office and thus the party’s nominee in November, Jerry Jackson Sr. of Philomath. He is making his third try to win office in a county that for nearly a generation has routinely backed only Democrats.

Of the Democrats, the one who seemed the least politician-like and wonkish to me was Malone. He’ll likely be swamped when the teachers’ union and the rest of the Democratic machine rally behind Schuster, but it would be nice to have a rural type on the board for once. Or it might be something different to have young Kreth. When he first recited a list of Benton County cities, he left out Albany, but he’s eager and he obviously learns fast. Schuster said climate change is likely to be a problem for the county, which is almost certainly a wild exaggeration. Her main concern she said, is beefing up the county’s mental health programs.

If there was a lighter moment, it came when Schuster answered a question then handed the microphone to next-in-line Malone, only to snatch it out of his hand, having thought of something else to say on the subject, which happened to be “bullying.”

Taking turns giving sincere answers to somber questions, the candidates might have put a less civically minded and conscientious audience to sleep, but not in this case. The forum concluded with sustained applause, and I don’t think it was just because it was over. (hh)

(Reporter Bennett Hall covered the forum, organized by the Corvallis Gazette-Times and moderated by G-T Editor Mike McInally, and if you want to know what Hall heard the candidates say, you can read his report likely to appear in the paper’s Tuesday edition.)