A newspaper building will disappear 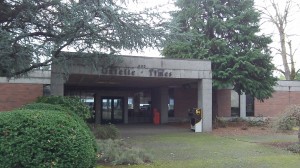 People will have to go elsewhere to find the Gazette-Times.

I’ve been rereading Patrick O’Brian’s Aubrey-Maturin novels since attending a very fine review in Corvallis last month. One of the recurring scenes in the books is the pursuit of one sailing vessel by another trying to capture or destroy it. In order to get away, the quarry throws things overboard to make itself lighter and faster. The cannons are the first to go, then other stores and finally the water. I was reminded of this when I read last week’s announcement by the Corvallis Gazette-Times.
The paper reported that it had sold its building for $1.8 million to a group of investors who plan to tear it down and put up housing. The paper’s staff is down to about 25 and will move to leased space elsewhere.

Pursued by technology and changing habits that are threatening to wipe them out, newspapers since shortly after the turn of the 21st century have been making themselves lighter, consolidating where they could and throwing things overboard — and people too. From metro papers like The Oregonian to small-town weeklies, they’ve been moving their output online, hoping readers will follow them there. To some extent it has worked, but the earnings are not the same. Papers are far from the money-making machines they were a generation ago.

Papers have lost readers and ad revenue and have shed news space and workers. And yet, even though much smaller, daily newspapers are still the only place where citizens can easily get fairly complete, disinterested and timely summaries of what people in government are doing for them — and to them. Nobody knows who will do that work once the newspaper people are gone and the only people reporting on the legislature, for instance, are interest groups and their publicists, supplemented by 30-second items on TV.

When I was the editor of the Albany Democrat-Herald, which since 1998 or so has been owned by the same company as the Corvallis daily, I visited the Gazette-Times building quite often, for meetings usually. I liked the building almost as much as the people working there. So even though the space had become much too big and uneconomical for the remaining crew, it’s sad to me to see it being sold, destined for the wrecking ball. (hh)

2 responses to “A newspaper building will disappear”