A new traffic signal, needed or not 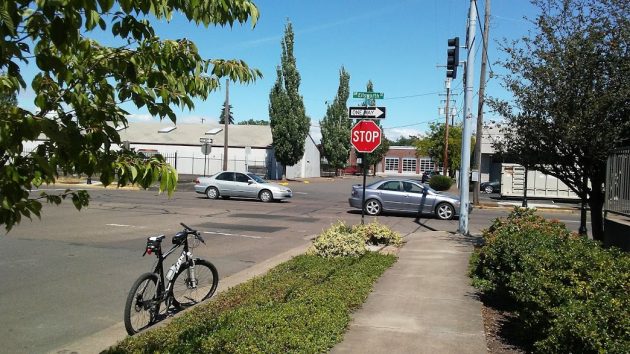 Sixth and Ellsworth: The signal and posts look and work fine, but ODOT says they are outmoded and must be replaced.

A year and a half ago, the Albany City Council was pressured into spending nearly half a million dollars on a new traffic signal that nobody except ODOT thinks is necessary. On Wednesday the council will be asked to complete that action by awarding a bid.

The council is scheduled to award a $336,181 contract to EC Company to build a full-fledged traffic signal at Sixth Avenue and Ellsworth Street. Together with design costs and other expenses, city engineers estimate the total project cost at $470,500.

For decades, a signal has stopped traffic on Ellsworth with a red light when fire trucks or ambulances from Station 11, one block east on Lyon, came along Sixth in reponse to an alarm.

In January 2017, the council and other members of the advisory board of the Central Albany Revitalization Area were told that this signal would no longer be good enough, even though it has worked just fine. The curb ramps at the corner were going to be modernized as part of the downtown streetscape project. This meant the signal would have to be replaced because it no longer met ODOT standards.

The upshot: A full-fledged traffic signal to control traffic on Ellsworth and Sixth.  And because ODOT won’t allow a signal to be dark, it will operate all the time, not just when he fire trucks roll. When the units do roll, operators can turn all the lights to red.

At the  time, Councilman Bill Coburn wondered what adding a signal would do to traffic congestion on Ellsworth. And he expressed irritation at ODOT for insisting on replacing the functioning light. He didn’t repeat those comments when there was an opportunity to do so at the council’s work session Monday night. (hh)


13 responses to “A new traffic signal, needed or not”