A new start in Independence 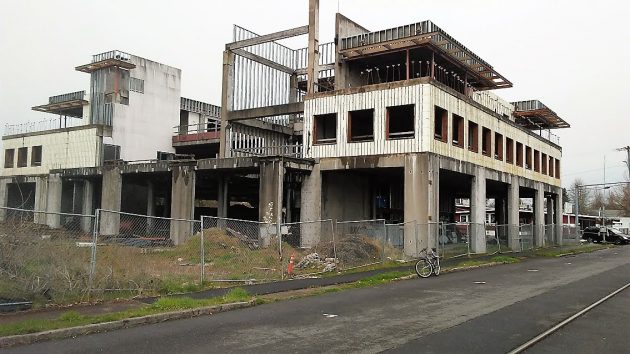 Independence Station the way it looked on March 24.

Last Saturday I rode a bike around Independence. I hadn’t been there for a while, and I wanted to see if anything had changed concerning Independence Station, the ill-fated project to build one of the country’s greenest buildings.

I had heard third-hand that things may be afoot about that big unfinished concrete skeleton in the middle of the town 30 minutes north of Albany. But on the ground, the place looked just as forlorn as it did the last time I reported on it, back in May 2016. But things may indeed be looking up.

“Yes, good things are — hopefully — happening with Independence Station,” Shawn Irvine told me by email when I checked with him. He’s the economic development manager for Independence. “The building was purchased in August by Chuck Sides, the developer of Keizer Station, among other things. Mr. Sides is working with several potential tenants and has told us that he will be coming in for permits to restart construction as soon as he has a tenant signed, which may be soon.”

I sent the developer an email inquiry to learn more about his plans but haven’t heard back. The same developer, Irvine told me, also bought property across the street for renovation as a brewery.

A gray weekend in March may not be the best time to see it, but Irvine says: “Independence’s downtown is really starting to take off. In addition to this project, we have broken ground on a $40 million hotel and residential development along the river, and a new 35,000-square-foot mixed-use building is also in the offing.”

The planned 75-room hotel, described by Irvine as an independent boutique, is a project of Tokola Properties of Gresham and Embarcadero Hospitality Partnership.

David Clyne, the city manager, was equally optimistic. “We are in the midst of a building and redevelopment boom that I have only been part of one other time in my 40 years of public service.” He credits a focused effort over 20 years by the city’s elected leadership. “Not having the disruptive politics common elsewhere is truly paying off.”

Independence started its downtown revival a few years ago with improvements along its main drag, complete with period lights and so forth. A few weeks ago I went to a public meeting (about Pacific Power’s smart meters) at the Independence Grill, a very nice and new (to me) restaurant in the revival area.

In Albany, Independence was mentioned when the idea of a downtown hotel came up during a general discussion by the advisory board of the Central Albany Revitalization Area this month. You can expect Albany to be interested in how things turn out in its Willamette River neighbor 26 miles downstream. (hh) 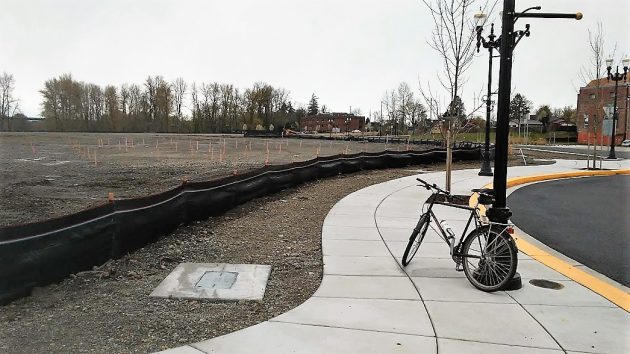 The riverside site of a 75-room hotel in Independence.

3 responses to “A new start in Independence”