A new judge and, unrelated, an old debate 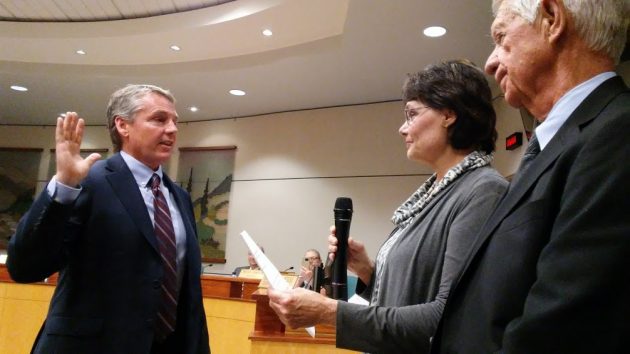 Wednesday’s Albany City Council meeting, the last one of the year, featured someone new and something old. One was the next city judge. The other was a rerun of last year’s disagreement between the mayor and council majority over the size of accessory dwelling units.

The council witnessed the swearing-in of Albany defense attorney Forrest Reid as the new municipal court judge after approving his employment contract. The one-year contract may be renewed year to year. It calls for the judge to work an average of 10 hours a week and sets his salary at $6,933 per month.

The son of the late Roger Reid, Forrest grew up in Albany and got interested in the law as a boy when watching his father work as the city judge at the old city hall, the former post office downtown. As the new municipal court judge, he pledged to do his best for the people of Albany.

Ceremonies over, the council turned to other business, the main part of which was a long-pending ordinance to amend the city development code, including the sections on “accessory dwelling units,” to make them comply with state law.

The council voted 4-2 to allow so-called ADUs of up to 900 square feet, with Dick Olsen and Bill Coburn voting no. Mayor Sharon Konopa is strongly opposed to any ADUs bigger than 750 square feet. She said she might veto the change, as she did in the summer of 2018 when this first came up.

If she does issue another veto, this will come up again next month so the council can try to overturn it. It takes five votes to do so, one more than the majority on this issue has.

Wednesday’s discussion was pretty much a replay of similar debates in 2018 and earlier this year. If you want the details, check out the video under city council meeting materials at cityofalbany.net.

The mayor, Coburn and Olsen want to protect existing neighborhoods with large lots from being overrun with big accessory units.The other four, Rich Kellum, Alex Johnson II, Mike Sykes, and Bessie Johnson, want to allow property owners more flexibility if they want to add an accessory unit. They point out that ADUs can only have as much floor space as 50 percent of the main residence and also have to meet setback and height requirements.

The proposed changes in the ordinance at issue are intended to bring the development code in line with state law.

If there is no veto, the ordinance will take effect in 30 days, after which opponents who took part in public hearings on the issue will have 21 days to take it to the state Land Use Board of Appeals. If there is a veto and it’s upheld, someone might take the city to LUBA for failure to comply with state law. (hh)

6 responses to “A new judge and, unrelated, an old debate”