A new home for six women 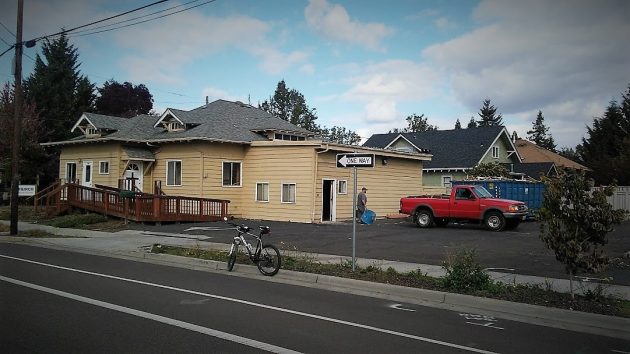 Demolition has started inside the building that Helping Hands is remodeling to house six women.

Albany Helping Hands is preparing to remodel a house in the Willamette Neighborhood for six women who can’t find anywhere else to live.

The 2,060-square-foot house and former church at 103 Main St. S.E., vacant for some time, once served as the original homeless shelter that later became Helping Hands.  The faith-based organization bought it last year from Pastor Les Bailey, its founder.

The Albany Community Development Department approved the conversion to a “residential care facility” on Aug. 1. On Aug. 22, the city approved a building permit, with Dahled Up Construction as the contractor. And when I looked at the site Tuesday afternoon, the interior demolition was well under way.

Neighbors had raised a number of concerns, according to a staff report by planner Anne Catlin, among them that there was  a “concentration of group homes and rehabilitation facilities in the neighborhood.”

Helping Hands told neighbors at a meeting in March that residents would sign a lease contract that requires compliance with house rules.

Originally, the plan had been to remodel the house for women with their children. But John Donovan, the volunteer development director of Helping Hands, told me this week children would not be living there.

The women for whom the house is intended are felons who have been required to return to the county where they were sentenced, Donovan told me. They are “good citizens” now, working and paying rent, he said, but haven’t been able to rent a place on their own because of their records. Without Helping Hands, they would be homeless or living in cars.

Helping Hands marked its 20th anniversary this year. It has beds for more than 100 people at its shelter on Ninth Avenue near Jackson Street. The need for more space is always great.

The organization owns three rental houses near its shelter and is hoping to buy more lots there from the city of Albany. Eventually, Donovan said, the goal is to build a couple of “pretty large apartment houses” on the site for men and women.

Donovan reminded me that Helping Hands operates on donations — including regular gifts from more than 800 subscribers to its newsletter — and the earnings of its businesses where shelter guests work. Those include a thrift shop, firewood supplier, produce garden, and U-Haul franchise.

No word on just when the women’s home on Main Street is expected to be finished. When I find out, I’ll pass it on. (hh)

10 responses to “A new home for six women”