A new chapter for the old St. Francis 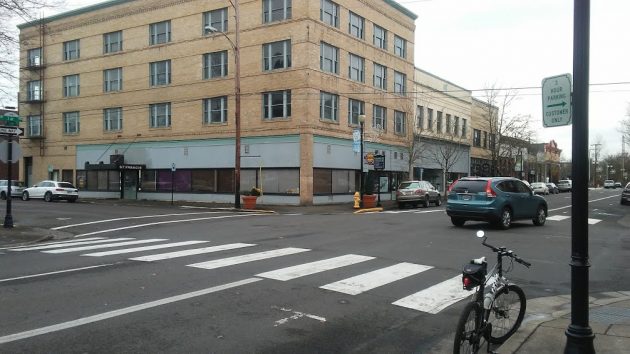 The old St. Francis hotel and Rhodes Block next door, at the corner of First and Ferry, on Saturday.

The city of Albany has finally made public its plan for the old St. Francis hotel building downtown. The plan is to buy the building from the printing company that owns it, and sell it to Marc Manley, who with his wife Anni owns and restored the Flinn Block farther east on First Avenue.

On Friday the city published the agendas for CARA and ARA meetings this Wednesday, Jan. 15. In a memo, economic development manager Seth Sherry points out that the intent of the purchase option was to find a buyer who would redevelop the historic hotel to further revitalize downtown.

He recommends in the memo that the ARA authorize the city staff to execute a contract with Manley’s MMVentures Inc. to purchase the building from the city for $700,000.

The proposed contract calls for negotiating, over a four-month period, a development agreement with Manley to cover things such as the building’s potential uses. The memo says the uses may include “residential, retail, commercial, and hospitality.”

There’s an assumption that any redevelopment of the old hotel will require some degree of financial participation by CARA. The details of that also would be covered by the development agreement.

The hotel was built in 1915. It is actually two buildings, and it hasn’t been a hotel for decades. Since the 1960s the ground floor has housed Pride Printing. Seth’s memo says that for nearly two years the city staff has worked with Scott Thorn, owner of the printing company, to discuss possible redevelopment of the building.

When the council approved getting an option to buy the building in June, it refused to name the property on the grounds, as stated by Councilman Rich Kellum in an email, of wanting to protect the business operating there. Presumably there’s no longer a need for that now.

The CARA advisory board and the council have been talking about the St. Francis deal in executive sessions closed to the public, as allowed by the state law on public meetings. In October, though, the identity of the property slipped out when Councilman Bill Coburn asked in a public ARA meeting whether there was anything new about the St. Francis.

One of the conditions of the sales contract with Manley is that Pride Printing move out. No word yet on whether the business will close or start somewhere else. (hh)

This story has been edited to explain why the city is not disclosing the option price it will pay if the deal goes through.


32 responses to “A new chapter for the old St. Francis”