A new addition on the Dave Clark Path 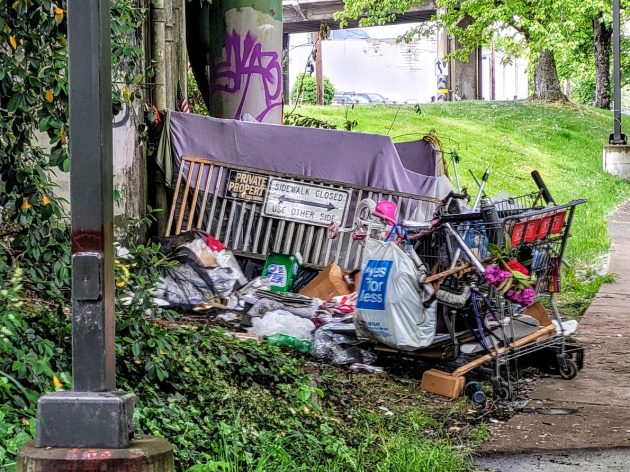 On the Dave Clark Path, under the Lyon Street Bridge, on Thursday afternoon.

There have been improvised homeless camps along the Willamette River in Albany for years, but not up on the Dave Clark Riverfront Path — until now.

The pile of stuff in the photo above has been set up on the side of the Clark Path underneath the Lyon Street Bridge for at least a week.

It’s not clear whether the real estate under the two Highway 20 bridges belongs to the state or the city, but the walking and bike path along the riverfront is officially a city park.

Albany has local law banning overnight camping in city parks. The law says people doing so anyway can be cited for a violation, for which the maximum penalty is a $100 fine.

Nobody thinks slapping homeless campers with $100 fines would do any good. And anyway, there’s no sign that local authorities have taken notice of this particular violation, visible to everybody who has walked, jogged or bicycled past this spot on the path since at least May 20.

This is just one camp along the path, but it makes you wonder if it’s the precursor of many more, and whether the path eventually will look like similar venues in other West Coast towns from Seattle to San Diego — long lines of homeless camps surrounded by mounds of debris.

On Tuesday I asked Police Chief Marcia Harnden if anything could be done about an apparent rise in outdoor squats as the weather turns mild and summer gets close.

“It is quite an effort to stay on top of it in our more wooded areas,” she replied. But if I understand her correctly, officers in the department’s community resource unit will concentrate on the problem this summer.

Last October, the Albany City Council authorized the police and parks deparments jointly to hire a single park service officer to respond to problems such as unauthorized camping and trashing of public spaces. Someone has been hired for that job and is scheduled to start on June 16.

The question for the council is whether this is enough, or whether Albany is destined to follow the pattern of bigger towns where camping by vagrants and other unhoused people has run out of control. (hh) 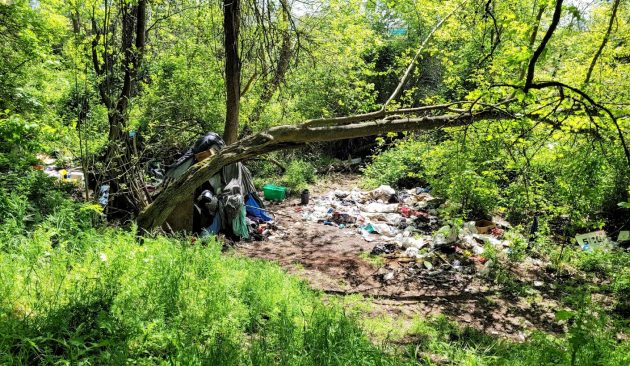 The debris field at a camp below the Cox Creek Path on May 10.


14 responses to “A new addition on the Dave Clark Path”