A neglected lake near Albany 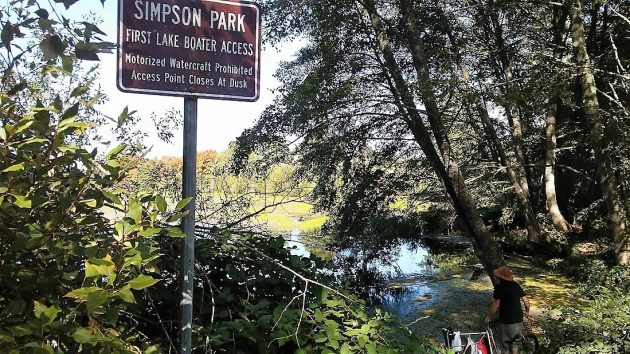 A man in a hat with a bike and trailer checks out the scene at First Lake recently.

To get to the Simpson Park Trail, you pass what is advertised as the boater access on First Lake. But the conditions are such that there’s no great rush of boaters at this neglected Albany lake.

Getting a small boat in there is possible, but first you have to carry it a ways because the gate to the trail at the Simpson Park parking lot is usually closed, presumably to keep vehicles out. And then, this pond is so choked with weeds and algae that paddling or rowing a boat would seem like too much of a chore.

It’s too bad that First Lake has deteriorated to this point since it served as a log pond for the nearby mill, long gone, for which the Albany park is named. (It’s an Albany park, but the lake and the trail are actually within the city of Millersburg. If there are any jurisdictional issues, I’m not aware of them.)

As the name of the lake implies, there are more of these former oxbows of the Willamette River. First Lake leads to Second Lake, which leads to a channel, and that leads to Fourth Lake, which gets back to the river. That would make the channel Third Lake, though it’s hard to see on Google Maps how this almost invisible ditch deserves to be called a lake.

A few years ago, people contributing to an online forum reported catching big bass in First Lake, despite or maybe because of the weeds.

I’ve never seen a boat on that water, and I’m not that interested in bass or any other kind of fish. But if the weeds could be controlled, the lake might be an inviting place for exploring by canoe. And then, the access point on the trail would likely get more use. (hh) 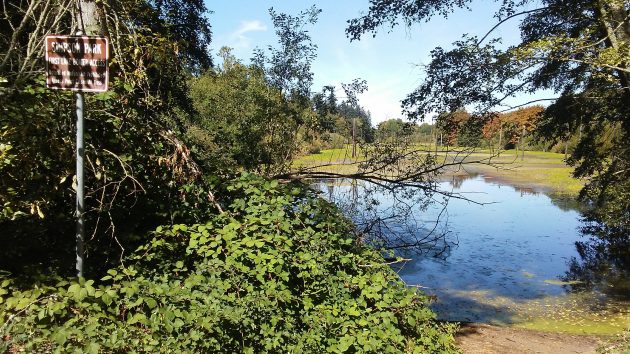 
10 responses to “A neglected lake near Albany”