A musical kind of place? 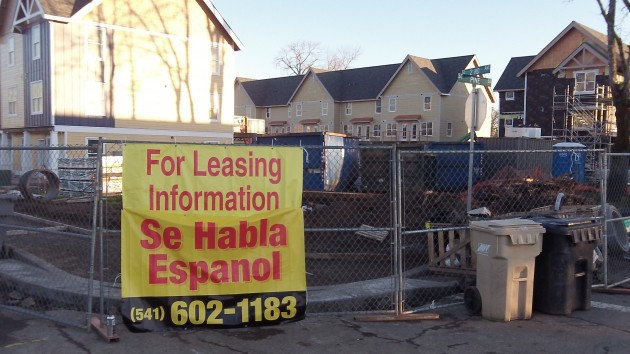 IHI’s housing development is nearing completion at Second and Pine.

Oboes? Flutes? Or are we talking clarinets or even saxophones? Hard to tell from the announcement that the Woodland Square housing development in Albany now will have a new name: Woodwind Apartments.

Innovative Housing Inc. of Portland, which is close to completing the 54-unit complex between Second and Salem Avenues at Pine Street, in December asked for suggestions for a name to replace Woodland Square, the former trailer park on the site. On Friday, an announcement of IHI’s name choice came from City Hall. (The city contributed $1.45 million to the $10.6 million project under the central Albany revitalization program, CARA.)

The name had been suggested by a 13-year-old student, identified in the announcement as Dw-Wayne Hill, who attends Standard Christian School, on Pine Street near the housing project. As for the choice, the city quoted Sarah Stevenson, executive director of IHI: ““The Woodwind Apartments emerged as the top contender from many excellent name suggestions because of the ease with which it rolls off the tongue, and because it evokes images of nature with its combination of wood and wind (a nod to the large trees that were preserved along Second Avenue). We are excited about using the name as a thematic starting point for future public art projects.”

Evidently it had nothing to do with woodwind instruments or music, after all. Too bad. If some of the apartments could have been designed for woodwinds, others could be set aside for percussion or even for brass. That would have enlivened the neighborhood! As for the three or four tall trees spared by the construction, they are on Pine.  (hh)


3 responses to “A musical kind of place?”