A milestone at Edgewater Village 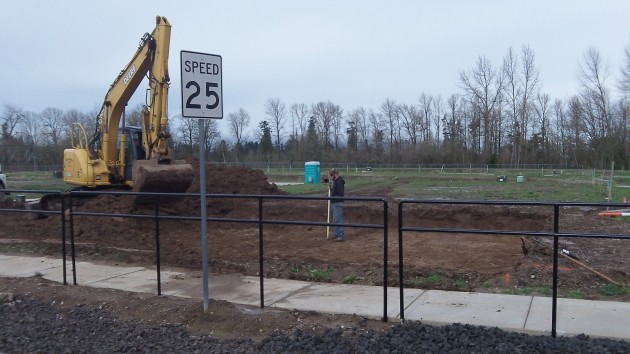 Laying for groundwork for a house at Main Street and Water Avenue.

At last: After years of planning and many delays, work has begun on the first house to be built at Edgewater Village, the residential development on which rest great hopes for the redevelopment of Albany’s riverfront. (It’s the sort of thing you notice when you take advantage of the first dry day in a long while and ride your bike down Water Avenue.)

Albany Building Official Gary Stutzman reports that Edgewater last week took out building permits for two houses. They are the vanguard of the first phase of five, being built along the northern end of Main Street, which marks the eastern limit of the development.

The Central Albany Revitalization Area (CARA) invested $2.4 million in the project, beginning with the cleanup of the ruins of a packing plant that burned down in 2006.

Developer George Diamond, a principal with Edgewater, last year got approval from CARA for a new set of deadlines for the project. Eventually, the 6-acre site is supposed to have 60 houses. Under the new agreement with CARA, the first five must be finished by Aug. 30 this year, 2015.

That gives the builders six and a half months. Better get cracking, then. (hh)


One response to “A milestone at Edgewater Village”