A message for the council 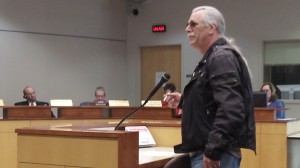 For devoted fans of Albany City Council meetings, the one on Wednesday night must have been a disappointment. It took all of 35 minutes and produced no news to speak of. (The appointment of Mario Lattanzio as police chief had been announced before.) Its highlight was the appearance of Jim Clausen, who regularly addresses the council when the agenda calls for “business from the public.”

Clausen, who sports an impressive pony tail and rides a motorcycle, is an activist on behalf of less government and more freedom. Years ago he got in the news when the Albany apartment where he lived tried to tell him he could not display the American flag on his parked motorbike.

Some weeks ago, a Benton County antismoking group had asked the council to fight so-called electronic cigarettes on the grounds they could corrupt or harm children, and also to be vigilant against hookah bars. On Wednesday Clausen ambled to the podium, whipped out an e-cigarette and took a puff to show that nothing but vapor comes out. Right on the wrapping, he noted, it says the thing must not be sold to children. And as for hookah bars, Albany doesn’t have any, so there’s no need for regulation.

The council had already declined to get into all this, merely appointing a liaison to the anti-tobacco group. Clausen says that’s how too much regulation proceeds — one little step at a time until we’re like New York, where the mayor tried to ban big soft drinks. Clausen can be a nuisance by taking up time, but his message is something the council should often hear. (hh)

Jim Clausen replied on May 9: “Nuisance”? I recall a certain city council member labeling concerned citizens “complainers.” Now others are calling them “nuisances”. Sigh…
Beside that, I agree, the council needs not only to hear from “nuisances” and “complainers,” but they need to pay attention to what’s going on around them. These groups purporting to be knowledgeable and upfront often have hidden agendas and can be very dangerous to our freedoms and rights. Hopefully the city council got that message…