A memorial to a troubled man 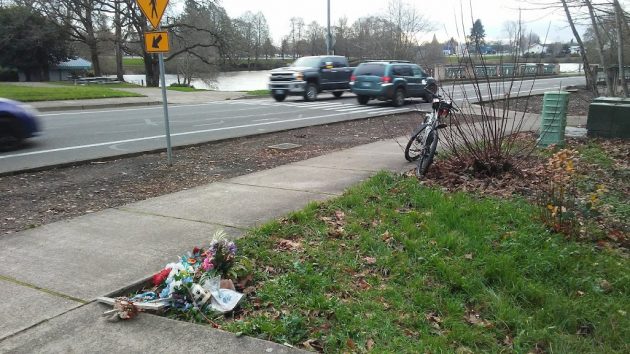 Traffic goes by on Saturday, past what’s left of this roadside memorial near Waverly Lake.

Dozens of times over the last few months, I’ve ridden the bike past a roadside memorial where the Cox Creek Path comes out on Salem Avenue. Wind and weather have reduced the shrine to a small pile of rubbish, but you can still tell for whom it was put up.

For the first time Saturday, I stopped and took a closer look. The wooden cross and plastic flowers are meant to remind us of Donald K. Sawyer, who lived from 1960 until this year. That much I could read on the material on the ground.

For more information, I checked the digital archives of the Albany Democrat-Herald. And there I learned that at the age of 57, Donald Keith Sawyer had died on a railroad track a few hundred yards from where the memorial shrine was set up. On April 12, he walked in front of a Union Pacific freight with his dog, and both were killed.

I didn’t know the man and learned little from the brief death notice in the local paper. But an online search of his name found three more hits, all of them reporting run-ins with the law.

In one notable case, the Albany police found a cigarette butt at the scene of a September 2011 theft from a construction site in the 800 block of Fourth Avenue S.E. At the state crime lab the DNA on the butt was matched with a sample in the state DNA database. The sample had been taken from Sawyer, and in July 2012 the police arrested him. He was 52 at the time.

The memorial looks pretty sad now. On a piece of wood, someone had written “in loving memory.” Perhaps it is comforting to be reminded that no matter how troubled your life or how sad the way it ends, there is somebody who remembers you with kind words. (hh) 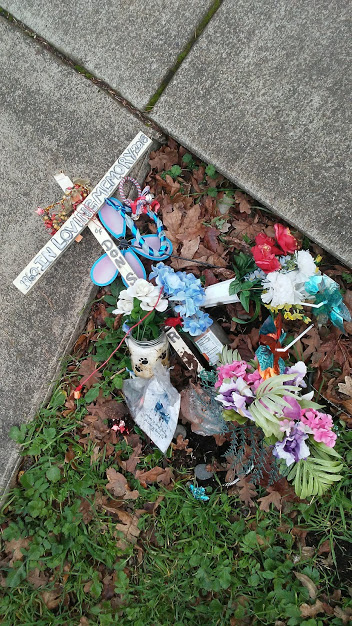 7 responses to “A memorial to a troubled man”