A man who made things better 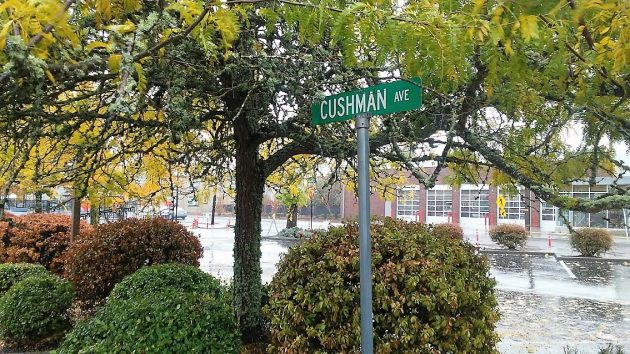 The scenery behind it has changed, but the street sign we put up at the newspaper years ago is still there.

On Friday I learned that Glenn Cushman had died in Bend, where he had lived for many years. When he appointed me the editor of the Albany Democrat-Herald in 1978, I asked him what he wanted me to do with the paper. “Don’t screw it up,” he said.

Cushman was a newspaperman for 40 years and the publisher of the Albany daily from 1968 until 1988 or a year or two later. I’m hazy on the year he retired, and his obituary in the Bend Bulletin was brief, which was typical of the man it described, and didn’t give that date.

His achievements were many, though. Chief among them was reviving the Albany paper and, before my time, with the help of people like executive editor John Buchner and circulation manager Syl Feil, turning it into a vigorous paper with a growing readership and a strong local voice.

Also, though, he expanded the Democrat-Herald Company for its owner, Glenn Jackson, by adding other papers in Lebanon, Ashland, Gresham, Cottage Grove, Springfield and Newport, as well as other places in Washington and other states. He then managed this far-ranging operation when it was bought by Capital Cities Inc., a broadcast and newspaper company with a national presence.

After Cushman retired, this array of publications was pretty much dismantled or spun off under subsequent owners, first The Disney Co. for a while and then Lee Enterprises, which still owns the papers in Albany and Corvallis.

Glenn came back for a visit to Albany when we opened the remodeled Democrat-Herald building in about 1994. In think it was on that occasion when, to pay our respects, we put up a street sign with his name on it in the parking lot. In the rain on Saturday, I checked and was glad to see that “Cushman Avenue” is still there.

Cushman died on Oct. 15. He was 89. His obituary came out in The Bulletin on Friday. It said that after retirement, Cushman was asked what he missed most about his career. “Trying to make things better,” he said. Making things better is what he did, and when I worked for him, I tried to follow his advice not to screw things up. (hh)


9 responses to “A man who made things better”