A loss of property tax revenue 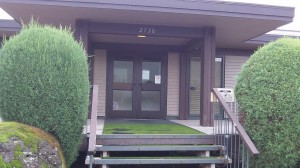 The front door of the former Willamette Industries and later Weyerhaeuser offices in Albany.

As long as our public services are supported by the property tax, losing some of that income is not a welcome move, especially when the taxes are paid by a big multinational company based somewhere else. I was thinking this when I read that the Linn County Board of Commissioners had just decided to spend $1.4 million to buy and remodel the former Weyerhaeuser office building on the north end of Pacific Boulevard. The building used to house the Willamette Industries timberland and mill administration when that company still existed and had a big presence in the mid-valley’s wood products economy. The property, vacant for the last two or three years, has been for sale for some time. A few years ago the Albany police department looked at it as a possible site for a new headquarters, before dropping that idea in favor of another site, which it bought but has not yet developed. The county plans to house several branches of its health department in the former Weyerhaeuser building, saving a reported $72,000 in rent a year. The property has an assessed value of $2.8 million, on which the Weyerhaeuser company paid nearly $54,000 in property taxes for 2012. When the county owns it, that value will go off the tax rolls, and the taxes, which amounted to about half a million dollars over the last 10 years, will no longer be coming in. So the annual savings in rent will not be nearly as great a deal as it may sound at first glance. Public agencies obviously must be housed somewhere, and the county has to be able to acquire property when a public need exists. Still, as long as local services depend on the property tax, the loss of private property from the tax rolls ought not to be be taken lightly, let alone ignored. (hh)