A long case, for a reason – Hasso Hering

A long case, for a reason 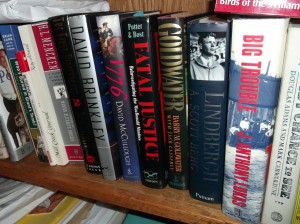 Seeing this book on my shelf, in the middle here, started these reflections.

I was idly looking at my bookshelf Thursday when my eyes lit on “Fatal Justice.” Whatever happened to Jeffrey MacDonald, I wondered.

He’s the former Army doctor whose pregnant wife and two young daughters were murdered in their house on base at Fort Bragg, N.C., in 1970. MacDonald was badly injured in the same attack. But in 1979 he was convicted of murdering his family. The conviction was overturned once but then reinstated. Except for that brief period, he’s been in federal prison since. Now he’s 69 and still fighting to prove his innocence in a fair trial.

In the 1980s I read a book called “Fatal Vision,” whose author, Joe McGinnis, concluded that MacDonald was guilty. But then, “Fatal Justice” came out in 1995. The authors, Jerry Allen Potter and Fred Bost, demonstrated that the case was mishandled from start to finish and MacDonald got a raw deal. Now a new book has come out, “A Wilderness of Error” by Errol Morris. A former investigator, he too documents flaws in the prosecution.

My otherwise routine interest in the case as a reader perked up in the 1990s when I learned — through an Albany man who I still believe was unjustly convicted in a completely different and unrelated case — that MacDonald was an inmate at the federal prison in Sheridan. That’s why looking at the bookshelf made me wonder about the latest.

Well, in September a federal judge in North Carolina held a two-week hearing on evidence. It may be a year or more before he rules. In October, “Fatal Vision” author McGinnis, who testified against MacDonald, complained in a New York Times column that this case — like Jarndyce in Dickens’ “Bleak House” — may outlive all the principals who started it. That’s what you get when a man is imprisoned for life in a case marked by sloppiness and misconduct and the courts refuse to admit their mistake. (hh)