A little smoke on my ride …

On my ride Saturday, I could smell smoke from a long way off, which seemed a little ominous in the middle of summer when open burning is not allowed. Then I got closer and realized the fire, in a pile of grass straw, had been put out but was smoldering still.

This was on Bryant Drive outside of Albany. It’s part of my route most days, but I had skipped that road a couple of days. On the fire department’s Facebook page, I learned that the department had been called to this straw fire on Thursday morning and promptly put it out.

In its posting, the department said the fire-blackened pile would be smoldering “most of the day” and was being monitored. Two days later,  on Saturday afternoon, it was no longer being watched, except briefly by me, but was still putting out a fair amount of wispy smoke.

My bike rides are not known for a lot of excitement, or any, so even a smoking pile of straw was reason enough to stop and take note of the scene. The fire-line tape was still fluttering in the breeze, and it looked as though the smoldering phase would go on for quite some time. (hh) 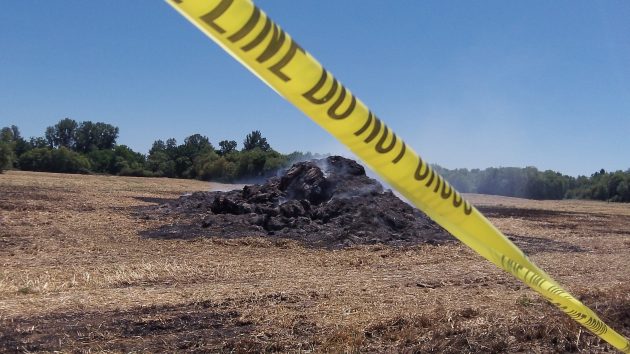 
One response to “A little smoke on my ride …”