A hotbed of construction east of I-5 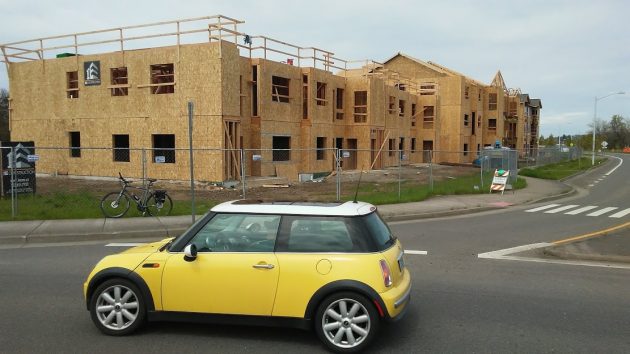 Apartments are springing up next to the Knox Butte Road and Timber Ridge Street roundabout.

The bike took me to the wide-open spaces of northeast Albany this week, and they’e no longer wide open. Everywhere I went, there’s construction– new streets, houses, apartments, and of course the new Meadow Ridge School itself.

On opposite sides of Timber Ridge Street, builders seem to be in a race to see who finishes first — the Timber Ridge Place apartment complex of more than 130 units near the Knox Butte roundabout, or the 90,000-square-foot Meadow Ridge School at the other end of the street.

From the street, the site of the new school just north of Timber Ridge School looked like this on Monday: 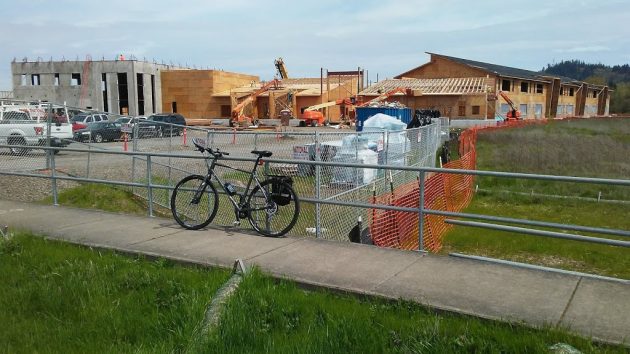 The $40 million school is supposed to be ready to occupy by November or December, but according to a report to the Albany School Board, the construction was about three weeks behind schedule as of March. But the board was told the district had been assured it would have access to the building by January 2020.

I don’t have an exact count, but judging by recent land-use approvals, the neighborhood east of the freeway is getting between 300 and 400 new dwelling units.

Both Timber Ridge, which opened in 2009, and Meadow Ridge were planned in anticipation of population growth on the east side of I-5. Looks like the addition of Meadow Ridge now is coming just in time. (hh)

2 responses to “A hotbed of construction east of I-5”