A four-day paper in Portland 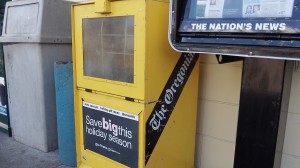 On Friday afternoon this Oregonian box in Albany was sold out.

There’s a good deal of online moaning about the decision by the Portland Oregonian to cut back its printed newspaper and concentrate on what it hopes will be its digital future. But let’s be practical. The decline of daily newspapers has been happening for some time, and it isn’t anyone’s fault.

With changing technology, the public’s habits have changed, and the economic foundation of newspaper companies has eroded. So they have to try something if they don’t just want to ride the down escalator to their eventual demise.

The Oregonian’s announced plans sound too confusing to allow a prediction of success. The paper will restrict home delivery to Wednesday, Friday, Saturday and  Sunday, but it will still print papers on the other days for rack sales. Seems that if you’re going to print them, you might as well deliver them.

On Friday I had another indication that the Oregonian ownership is not really interested in keeping its readers of the printed paper, even on fewer days. Reporter Eric Mortensen told his Facebook contacts he was among the staffers leaving the paper. I’ve regarded Mortensen as the best newspaper writer I’ve ever read. If papers don’t hold on to talent like his, we might as well watch TV.

In any case, I doubt that digital operations can ever equal the role of a community or metropolitan daily in its own town or state. It takes the power that comes from a big audience and a sound revenue stream to report on government and business in an independent and skeptical way. In the digital universe, the audience is scattered and the revenue is not sufficient to support a big enough reporting staff. So in terms of government being held accountable, the future looks cloudy and dim (hh)

Sam Suklis responded on June 21:  That “revenue stream” you mentioned is on it’s way to being a wadi. We are so delighted to be able to continue following your writings.

Ray Kopczynski responded on June 22: You have a time machine?  I note your column date shows June 22, yet Sam Suklis’ reply is dated June 21. Re the column: If the majority of news becomes online-only, that implies everyone is cannibalizing the same sources?  Who does the original reporting?  THAT takes feet on the ground and how does that get paid for?  Yes, the times are changing – but that has always been the case.  I suppose it may be inevitable the DH & GT will finally combine to a single paper inasmuch as they’re both printed in Albany.  That change has been coming incrementally for years now in my opinion.

As for the automatic clock assigned by this Internet system, it’s way off. No idea why. (hh)