A flag, a name and the building they’re on 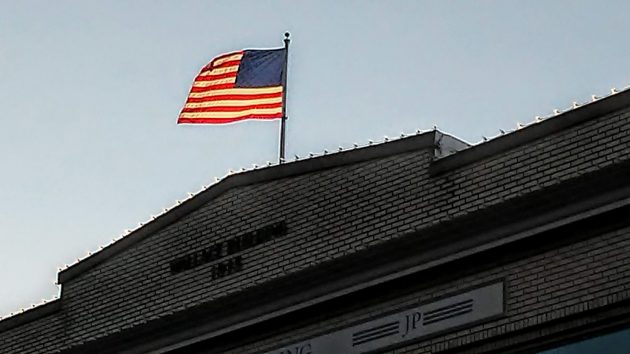 Wandering around downtown Albany on a summer evening, sometimes you look up and just have to take a picture.

This was on First Avenue last week, and the flag backlit by the setting sun was on what I called the old J.C. Penney Building in a recent story. Bill Maddy, a reader with a keen interest in Albany history, pointed out that it was actually the Wallace Building.

He’s right, though everybody, including the Albany Visitors Association in its downtown walking-tour guide, calls it the Penney Building because until the 1980s that’s what it was. But as the lettering on the wall below the flag confirms, Wallace is the original name.

So who was this Wallace who named the place?

Turns out it was Dr. J.P. Wallace, who went before the Albany City Council on June 23, 1915, and asked for approval of his plans for a building on a site formerly occupied by the Hamilton Store.

The month before, he had asked the council’s permission to use part of the street for his project. The basement would be nine feet deep and extend 12 feet under the sidewalk.

Then in June, the Albany Daily Democrat reported on the plans being submitted to the council. One of the decks of the headline proclaimed: “Will Be One of  Finest Structures in Albany.”

The building, the story said, would measure 77 by 101 feet and was planned to be two stories, though it would be built so another two floors could be added later. There would be a mezzanine 28 feet deep, and the basement would be fitted out as a sales room as well. Some 200,000 bricks would be needed.

Herbert Babb designed the building. In newspaper ads after the project was completed, he proudly reminded readers of the Albany Evening Herald: “Architect for the Wallace Building.”

For a while it was the Worth Department Store, but in August 1020 the J.C. Penney Co. leased the place and moved in. It would stay there for 68 years, long enough for Albany newcomers like me to buy shirts there, and pants.

You can look up details about the origins of buildings in small towns because newspapers reported on them, and a company called Newspapers.com now has digitized millions of pages and makes them available online. And if you look at one thing on a page from 1915, you learn about dozens of other developments at the same time. The Great War in Europe, in this case, and the Wilson administration’s demand that Germany stop its U-boats from killing Americans on the high seas.

The question that pops up is this: A hundred years from now, will our own digital reports survive in a way that gives them historical context and in a form that can be read? (hh)


11 responses to “A flag, a name and the building they’re on”