A facelift at Baker and First

The building housing AK Carpet & More dates from 1946, according to the Linn County assessor.

Another downtown Albany building, this time on the east side of the business district, is about to get an exterior makeover. The owner is getting a bit of help from CARA but is bearing almost the entire cost herself.

On Wednesday this week, the advisory board of the Central Albany Revitalization Area, endorsed a $10,000 grant request to help building owner Andrea Hampl complete a $175,000 facelift of 140 First Ave. S.E., on the corner of First and Baker Street. The city council, acting as the Albany Revitalization Agency, then confirmed the grant.

The building’s former canvas awnings have already been removed. The second-floor windows are being replaced. Next up is the construction of a continuous metal canopy partially covering the sidewalk above the display windows on the ground floor. And it is with the cost of this feature, higher than anticipated at nearly $70,000, that the owner needed some help.

“The ultimate goal is to restore the building to (its) historic feel and look with a modern twist,” Hampl told CARA in her application to the city’s storefront revitalization program. The owner put $105,000 into the project and got a bank to finance $60,000 of the rest. leaving a $10,000 gap which the CARA board agreed to bridge.

Hampl’s application said the work should be done by the end of April. For now, she is concentrating on fixing up the outside. In the longer term, though, she hopes to remodel the upstairs, now used for storage, as apartments or lofts.

The sooner that comes about, the more residents will be living downtown, and that’s one of the goals CARA is hoping to achieve. (hh) 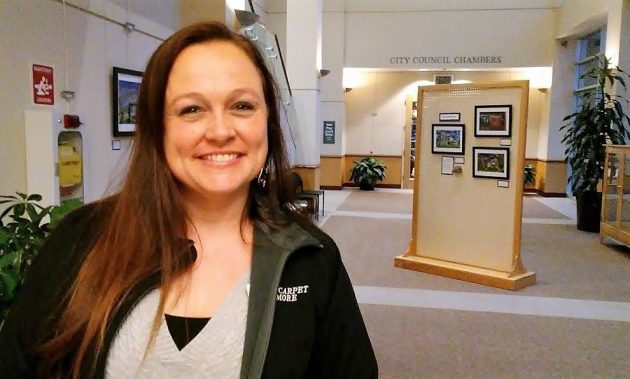 Andrea Hampl at City Hall after the CARA meeting this week.


12 responses to “A facelift at Baker and First”