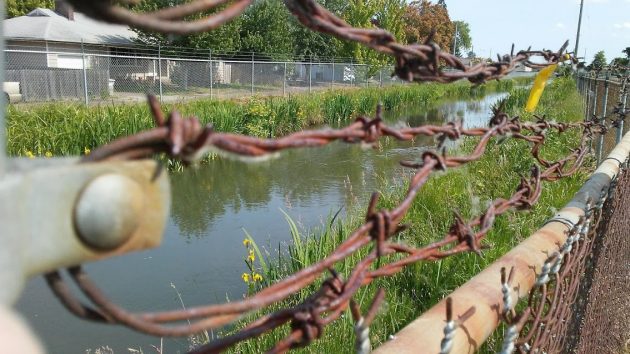 Three months ago, I looked at this mess of barbed wire on the Albany-Santiam Canal along with Jim Ketter, who had asked the city to remove it. Now Jim is gone, but the wire is still there.

Ketter, a former high school science teacher and then a physics instructor at Oregon State, died on Wednesday at the age of 60. He had been suffering from a brain tumor.

When I went to see him on March 7, it’s because he had written to Mayor Sharon Konopa and Councilman Dick Olsen with a request. What he wanted was for the city to get rid of the ugly barbed wire atop the chain link fencing that lines the canal through the Monteith Historic District. The barbed wire serves no purpose and it mars the looks of what could be a nice walk along this historic waterway.

Taking down the barbed wire could be done at little or no cost. No consultants would be needed for design. No studies would have to be conducted. Ketter, even though suffering from the debilitating effects of his cancer, even offered to help with the physical work.

When I met him after reading his letter to the city officials, we walked to the 12th Avenue bridge across the canal, two blocks from the Ketters’ home on Washington Street. He told me he and his wife, Ann, used to go for long walks along the canal and elsewhere in Albany. The barbed wire really bugged him.

Sprucing up the canal as a walking route is among the downtown improvement projects listed in the Central Albany Revitalization Area plan. But nothing has been done to bring it about since the plan was adopted in 2001.

Jim Ketter’s idea of removing the barbed wire struck me as an inexpensive way of realizing at least part of this long-ignored city goal. Or, the 6-foot chain-link fencing could be exchanged for something  less prison-like but just as effective in keeping people from falling in.

After talking with Jim, I waited for something to happen. Nothing did. And when I eventually asked city officials about it, getting the barbed wire removed or the fencing improved did not appear likely to happen any time soon.

But it should. Not just because a concerned citizen and taxpayer made a case for doing so. But because it’s a good idea. (hh)