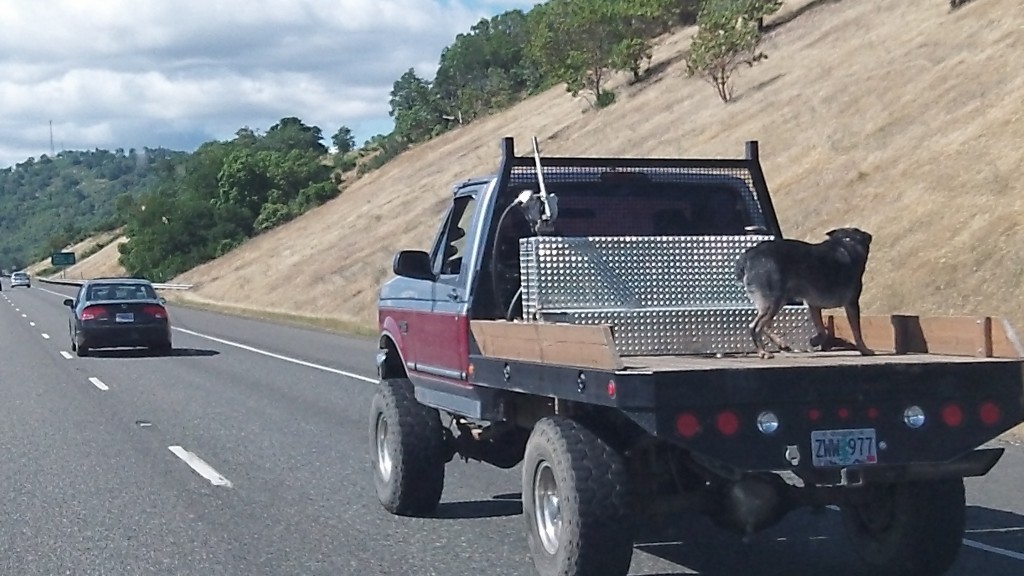 Heading north on the interstate.

This is not the recommended way to transport a dog, I would say, not at freeway speeds on Interstate 5 anyway.

This dog looked pretty excited, running from one side of the truck bed to the other and back again.  As near as I could tell, it was tied to something with a leash or a rope.

The Oregon Humane Society says that carrying a dog in an open pickup bed poses a threat to both the animal and other motorists. “If you hit a bump, swerve to avoid an obstacle, or brake suddenly, your dog could easily fly out of the truck.” And tying the dog to something is dangerous too, the society says. “Ropes and leashes become nooses if the dog should be jolted out of the truck.”

It turns out that there’s even a law on the subject. Oregon Revised Statutes, Section 811.200, says it’s a Class D traffic violation to carry a dog on an “external part” of a vehicle such as the hood or the running board or any other part unless the animal is “protected by framework, carrier or other device sufficient to keep it from falling from the vehicle.”

Nobody has running boards any more, but the flat beds of pickups are hardly any better, are they? This shot was taken Sunday afternoon (May 19). I hope the dog got where it was going without any mishap. I passed the scene as quickly as I could because I didn’t want to see it fall. (hh)

Jeff Turner responded May 19 via Facebook: My wife and I cringe whenever we see this. Living in the mid-Willamette Valley, this is a pretty common occurrence.
Michele LaBounty responded May20 via Facebook: Thanks for writing about this – and shooting the art to show how inhumane many people treat their pets. Makes me sick. I want to pull them over and have a heart-to-heart. Maybe we should let dogs drive and tie the human with a rope or chain to the bed of the truck? Central Oregon is packed with people like this!
Posted in: Commentary, News
Tags: dogs and pickups, I-5, ORS