A ‘derelict structure’ along the tracks 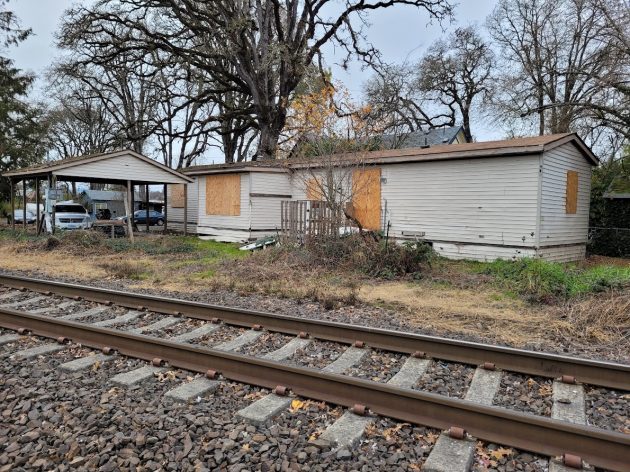 The boarded-up house alongside the Portland & Western Railroad track is at 329 Pine St. S.E.

For people on foot or on a bike, there’s a shortcut across the railroad tracks on Pine Street in Albany. If you take it, as I did again on Sunday, you pass a boarded-up house marked with a City of Albany notice: “Derelict Structure.”

What’s happening with that sad-looking place, a manufactured home, at 329 Pine St. S.E.?

The notice apparently has been there since the summer. It gave the owner until Sept. 19 to fix a number of defects.

A few weeks ago I ran a photo of the place to illustrate a story about amendments the city council had approved to the property maintenance requirements in the Albany Municipal Code.

That photo brought a comment from someone who complained that for years the owner had failed to maintain the place, that the tenants had tried to do what they could, and that condemning the place as derelict “practically forced those tenants to become homeless.”

At the time, in late October, the front of the vacant house was covered with graffiti. In November, volunteers painted them out.

What happens to the property now?

In cases such as these, the city’s costs of abatement, such as putting up plywood, are assessed against the property. If they’re not paid or the code violations are not fixed, the city may foreclose and take ownership of the property.

Then the city would decide whether to repair the place and sell it, or demolish the structure and sell the land.

“As far as the foreclosure goes,” Albany Code Compliance Officer Kris Schendell told me a month ago, “it has been forwarded to the city attorney to act on, and I am unsure of his timelines.”

As I said, I use the Pine Street shortcut now and then. So I’ll probably see what if anything happens there next. (hh) 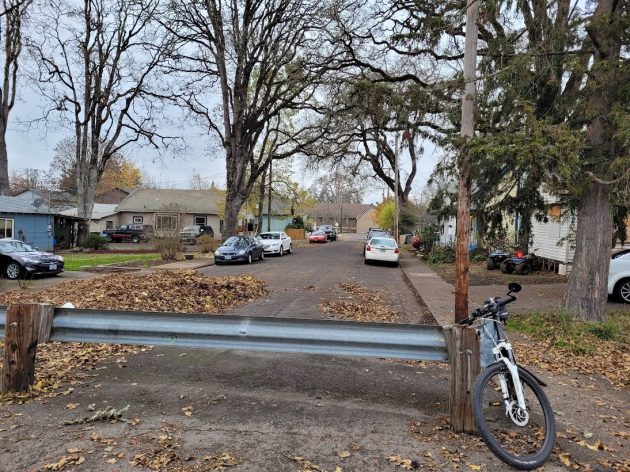 The tree-lined 300 block of Southeast Pine Street ends at this barrier before the tracks. 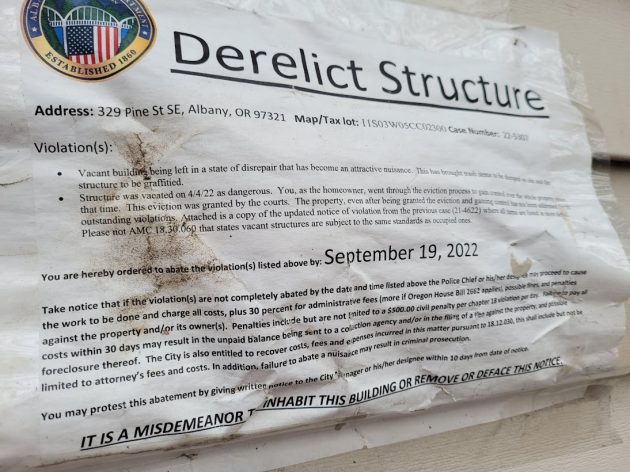 The city’s notice was still there on Sunday.


10 responses to “A ‘derelict structure’ along the tracks”