A conversion that didn’t take 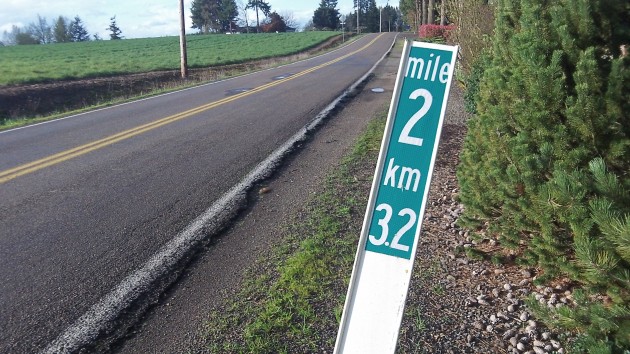 A handy reminder of how many kilometers there are in a mile.

As a quaint reminder of lost causes, it’s hard to beat this mile marker on North Albany’s Oak Grove Drive. After all, it’s a kilometer marker too.

The marker has been there as long as I can remember, which goes back almost 40 years, testimony to the longevity of plastic even in the outdoors of the great Northwest. (Or maybe it’s fiberglass.)

Remember Lincoln Chafee? He’s the former governor of Rhode Island who last year announced he was running for the 2016 Democratic presidential nomination. “Let’s join the rest of the world and go metric,” he said when he announced as a candidate. Maybe that’s why he didn’t stay long in the race.

The two-mile marker on Oak Grove was put in during the 1970s, when Benton County apparently was on a kick to get people accustomed to kilometers along with miles. Maybe it had something to do with the Metric Conversion Act passed in 1975.

The act was passed by Congress, and perhaps it involved grants to local road authorities to encourage the use of metrics. The details are lost in the mists of history. In any case, the use of metrics remained voluntary, and most of America ignored it.

Turns out, as I learned online from a story by CNBC, that the metric system of weights and measures has been legal in the United States since 1866. In that year, President Andrew Johnson signed into law a congressional act that made use of the metric system lawful “in all contracts, dealings or court proceedings.”

Metrics may be legal. But as we all know, it’s not used except in science and a few other special cases. And on one stretch of Oak Grove Drive. (hh)


7 responses to “A conversion that didn’t take”