A concrete mystery: What was this? 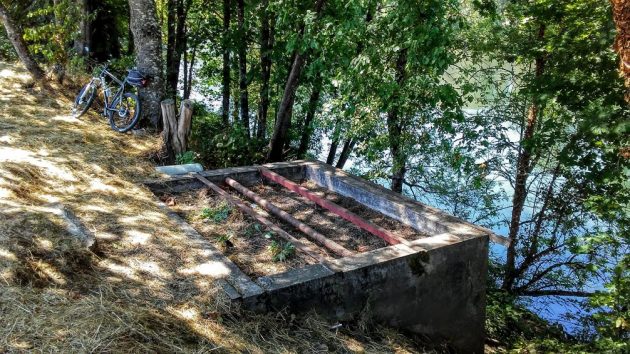 No one was sitting on these walls by the river when the photo was shot on Aug. 1.

For years, three or four times a week, I have passed this concrete ruin by the side of Albany’s Dave Clark Riverfront Path without thinking anything about it. The other day I finally wondered what it was a ruin of.

It looks like kind of a concrete box, about 8 by 10 feet, open at the top, filled with dirt, and crossed by a couple of pipes and a steel beam.

If you go by there when the weather’s fine, you will occasionally see people sitting on the walls for a smoke, or having a conversation or a snack. And why not? Sitting there, you get a nice view of the Willamette through the trees.

So what was it? Alas, I have no idea and have not been able to find out.

In the engineering office at City Hall, Gordon Steffensmeier came up with a blueprint for the construction in 1951 of the city’s Riverfront Interceptor, a big sewer main that runs along the river’s bank. The plan shows a rectangular shape where this box still is, along with a couple of smaller structures on the inland side and a concrete sidewalk connecting them.

On the land side, the plan shows the big building of the Borden Company. The building is still there and now houses the Deluxe Brewing Company.

The late Robert Potts showed the building in the third volume of his “Remembering When” photo collections of old Albany. He called it a “milk condensery” and said it was built in 1929. The Borden Western Company ran it until it closed in 1963.

So, what about that concrete box?

“My bet,” Steffensmeier said, “is that it had something to do with the Borden Company. Maybe some sort of discharge to the river?”

Maybe so. And if anyone knows for a fact what it was and what purpose it served, I’d be grateful for a tip. (hh)


6 responses to “A concrete mystery: What was this?”