A change is coming at former Izzy’s address 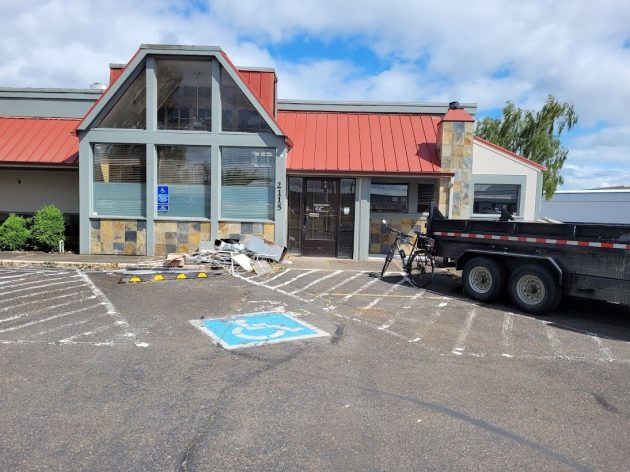 This used to be the building of Izzy’s, a popular Albany restaurant.

On Facebook the other day, some people were surprised that Izzy’s restaurant at 2115 S.W. Pacific was no longer in business. But it hasn’t been around for a quite a while.

Izzy’s was started in Albany in 1979. In the 1980s and ’90s, the restaurant came to be a favorite with families. And if your kids played on various teams in those years, you may recall going to numerous after-game or season-ending pizza parties at Izzy’s.

In recent months, there were signs of demolition inside the building.

The last mention I could find of Izzy’s in the local paper was in March 2020. That’s when Gov. Kate Brown ordered restaurants to close for at least four weeks to stem the spread of the Covid outbreak.

A story in the paper that month listed Izzy’s as among several local restaurants that did not have the option of switching to provide only take-out meals. It appears it was then that the place shut down, never to reopen.

Now something new is going in at 2115 Pacific Blvd. S.W. On May 27, the city’s building division approved a permit for extensive changes at the address, including “tenant improvement for a new Subway location.”

The permit was taken out by Sub Nation LLC. The company’s address is the Subway sandwich shop on Highway 34 near Interstate 5. It lists Elena Fortier as director of operations and Luke Fortier as registered agent. Sub Nation also owns the property of a Subway shop at 2615 Pacific Blvd. S.E.

Last September 1, Sub Nation bought the former Izzy’s location for $1 million, according to an online record at the Linn County Assessor’s Office.

Sandwiches are not the only thing in the offing there. The building permit says the storefront is to be reconfigured to provide a new entrance to a future tenant suite. (hh)