A brighter downtown — on one street 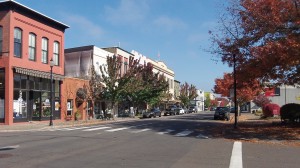 First Avenue will get tree lights. 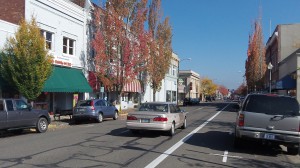 Second won’t; it has no outlets.

Downtown Albany may become brighter during winter nights — or as soon as a new lighting program can be started. But unfortunately, it will be a change limited to just a short stretch of First Avenue. And that brings up an old complaint that has been all but forgotten.

The advisory board of the Central Albany Revitalization Area (CARA) has approved a request by the Albany Downtown Association for $3,750 — unless the money can be taken from an allocation to the association of city hotel tax revenue, something Mayor Sharon Konopa wants the staff to look into.

The money will pay for fitting 60 street trees along First Avenue from Washington Street to Ellsworth Street with five strands of LED lights each. The trees then are to be lit up during the hours of darkness from October through March in coming years. The downtown association says the lights should last more than eight years, but no one was sure whether they could be installed in time for this winter.

Why only on First? Because the city installed outlets there during the First Avenue sidewalk remodeling, CARA’s first million-dollar-plus project after it started in 2001. At least one business owner on Second complained at the time at being left out, and there were vague promises that something would be done. But nothing was, at least nothing of the scale of the work on First.

If the city pays for festive lights in order to help business by attracting people downtown, you’d think this benefit should be spread to more than three blocks of one street. (hh)

Gordon L. Shadle:  Every business in the CARA area is on the city’s favored list. Now we learn that some are more favored than others. I feel better knowing that my property taxes are being siphoned away from essential services like public safety for this purpose. (sarcasm switch off)