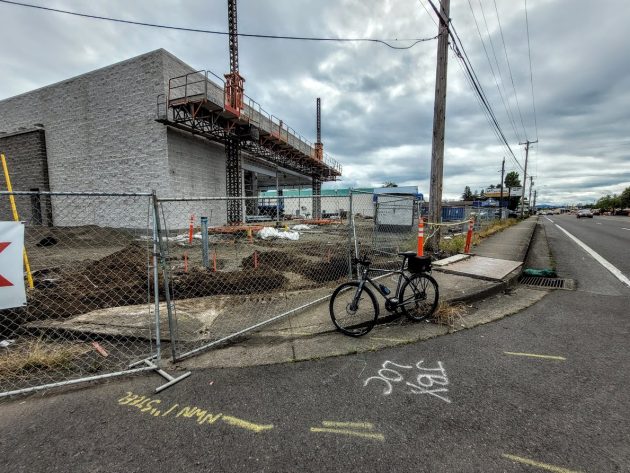 The construction site at 2850 S.E. Santiam Highway on Sunday afternoon, when no work was going on.

Companies building a store in Albany, especially a big one that everybody driving by can see, are missing a bet when they don’t put up a sign explaining who they are and what they’re building.

If they did, they would satisfy the natural curiosity of the public, and they might even get a head start on winning customers.

In recent weeks I’ve received questions about what’s being built at the corner of Santiam Highway and Shortridge Street. Thousands of people drive by that corner every day. And when you see buildings being razed and a new one put up in their place, it’s natural to wonder about what’s going on.

In this case, you would not have wondered if you had seen, or remembered, a story that appeared here on March 30, 2021. “National chain plans Albany tire store,” the headline read. You can look it up here.

The story was based on a land-use application filed with the city of Albany. The city approved the application in June 2021.

The gist of it was that Discount Tire, said to be the largest independent tire and wheel dealer in the world, planned to open a store at the coner of Santiam and Shortridge. Three lots at the corner had been bought by Halle Properties of Scottsdale, AZ, a company formed by the late Bruce Halle, the founder of Discount Tire.

The site is across Santiam from another big tire store, Les Schwab. Whether that had anything to do with the Halle company’s choice of location, I don’t know.

The building permit for the project, issued last November, names a different property owner, a limited liability company whose address is the building site itself: 2850 S.E. Santiam Hwy. But it does mention “tire racking plans,” so we have to assume it’s still a big tire store that will open there.

But again, builders of significant structures could save the public a lot of guesswork if they just put up a sign. (hh)

The Les Schwab store is right across the street on Santiam Highway.