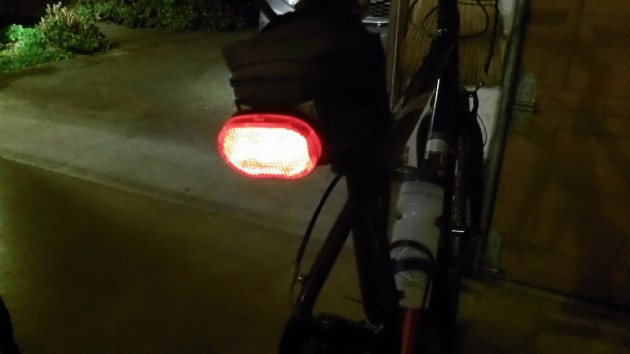 This kind of light presumably would meet the requirements of the amended bill.

You can’t look away from the legislature for even a day. If you do, you might miss legislators doing something sensible, as members of a House committee did last week on the matter of bicyclists in traffic being hard to see at night.

Many of us have encountered — and nearly run into — people on bikes ghosting through a rainy night, in dark clothing and without any kind of illumination. To fix this, Rep. John Davis, R-Wilsonville, introduced House Bill 3255 to create the offense of riding a bike after sundown without wearing reflective clothing.

The problem is that reflective bike gear is expensive. My guess is that most of these hard-to-see night riders wear the clothes they do because they don’t have any others and can’t afford to outfit themselves in the latest high-visibility gear. Slapping them with a $250 fine won’t do any good. The fine would likely go unpaid and eventually result in a warrant, which doesn’t help anybody.

So on April 10, the House Committee on Transportation and Economic Development amended the bill and recommended without dissent that the House pass it, which it is scheduled to do Friday (April 17).

The amended version would require that bicycles be equipped with a red rear light, not merely a reflector. The light would have to be visible from 600 feet in any direction to the rear of the bike. This makes more sense than the original because a $20 battery-powered light is far more affordable than an $80 reflective bike jacket.

Sensible people who ride their bikes for transportation after dark already have front and rear lights. Even the rest of us have little rear lights on the back of the bike in case darkness overtakes us on a long ride.

The 600 feet worries me a little. Better make sure, in case the bill becomes law, that the batteries are fresh enough for the lights on my bikes to meet that test. (hh)

5 responses to “A better bill: Rear lights on bikes”