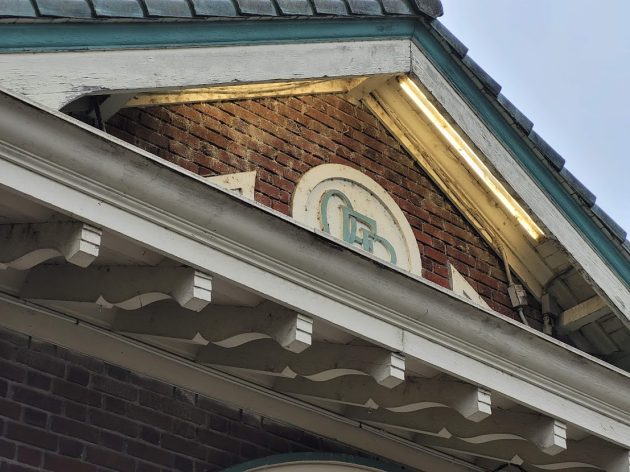 The gable on the platform side of the historic Oregon Electric Railway depot on Fifth Avenue looked like this on Dec. 4, 2021.

A downtown Albany landmark, the historic Oregon Electric Railway depot, will change hands if a pending sale goes through as intended. But there’s no word yet on how the building will be used after it is sold.

The outside of the old depot at 133 Fifth Ave. S.E. has changed little since it was built in 1912, when the Oregon Electric line from Portland reached Albany before being extended later to Eugene. On the street in front, the rails have been paved over, but sections are visible where the pavement has crumbled.

For many years the building housed Ciddici’s Pizza. The business closed last March because of an eviction order that resulted from a lawsuit over unpaid rent.

The building has been owned by T&H Investment LLC, of which Tariq “Tim” Siddiqui and his brother Hamid were the owners, and which Tim managed. T&H filed the suit over rent against Chanda Corporation, managed by Hamid and doing business as Ciddici’s Pizza.

Via Facebook messaging, Tim sent word in December that he had settled with Hamid. “Now he owns it lock stock and barrel,” Tim wrote. “This took place Nov. 30th, as a result of mediation.”

The OE depot downtown then was put up for sale. Jessica Pankratz, an agent with Town & Country Real Estate, confirmed that a sale was pending and may close in a couple of months, but she was not at liberty to divulge details.

During my days of working at the nearby Democrat-Herald office and later, this building was the site of many pizza parties and other get-togethers. It would be nice if the prospective new owners, whoever they are, intend to buy the place for a restaurant or some other public use. (hh)

At the corner of Fifth Avenue and Lyon Street on Jan. 12: “Sale Pending”