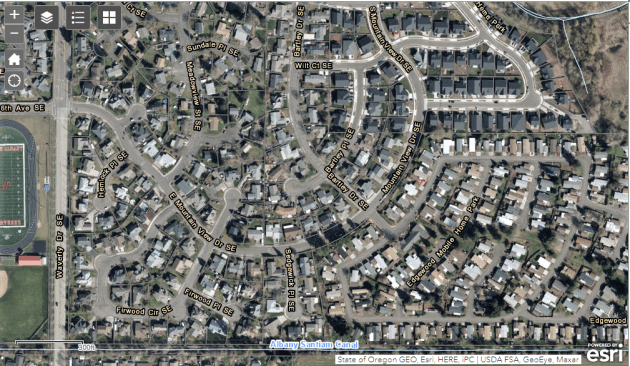 In an aerial from the city’s InfoHub map, this corner of South Albany looks pretty packed already, with little room for ADUs.

The long Albany council dispute over accessory dwelling units hit another milestone with the adoption of code amendments that make it official: These secondary units on single-family lots can be up to 900 square feet if they meet other requirements.

In a decision that ratified the outcome of an earlier vote, the council voted 5-1 Wednesday to adopt a package of changes to make the development code on ADUs comply with state law. The law leaves the size of ADUs up to local discretion, and 900 square feet, up from the previous limit of 750 feet, is the upper limit the council majority wanted.

Councilor Dick Olsen voted no. He urged Mayor Sharon Konopa to veto the change, as she did twice before, but she won’t. Olsen now is the lone opponent of the bigger ADU size, and under the city charter it takes two of the six council members to sustain a veto.

As the state law requires, the changes now adopted remove any ownership and off-street parking requirements for ADUs in Albany. Such units still must meet setback and height limits, and they can’t be bigger than half the footage of the primary house.

In the ADU debate over the last two or three years, opponents had worried that relaxing the city’s requirements would destroy established neighborhoods with a slew of additional units, causing streets to be clogged with parked cars, and that developers would buy and tear down old single houses and replace them with two.

Most Albany houses, especially in the newer sections, appear to be built on lots too small for an extra unit.

As for lots and houses in the historic districts, adding an ADU there (as I read the amended code) involves “historic review” as an additional step before getting a building permit. That might slow down any rush to plaster the old town with backyard units even where they could be shoehorned in. (hh)