30 years in Congress: Still plugging away 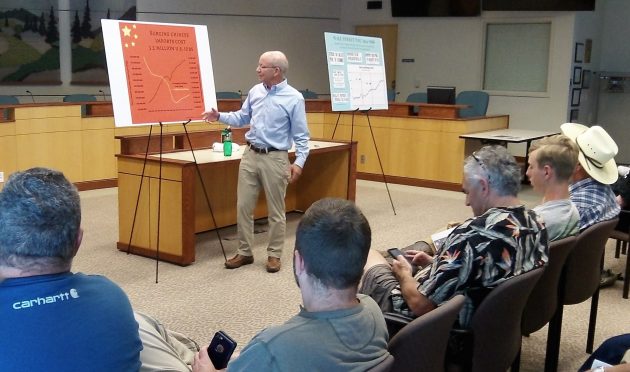 Rep. Peter DeFazio makes a point about China during his town hall meeting Monday in Albany.,

Monday afternoon didn’t promise any greater excitement elsewhere, so why not take in a public “town hall” meeting put on by Congressman Peter DeFazio, the Democrat who has represented Oregon’s 4th District since way before anybody worried about global warming. So I went.

I joined more than 60 others, and we took up nearly all the available seats set aside for the public in the council chambers at City Hall. For just about an hour we listened to DeFazio talk on his favorite subjects and field softball questions about the price of insurance, health care, guns, terrorism and other things.

DeFazio has been in the U.S. House since his first election in 1986, and now he’s running for his 16th two-year term. At 69, he doesn’t look any different from the first time I saw him 30 years ago: Still as wiry and fit as ever. As a Democrat, he’s been in the majority part of the time and in the minority the rest of the time, including the last few years.

For as long as I can remember, the congressman has been opposed to NAFTA and other so-called free-trade agreements between the United States and other countries. Now he and others are hoping to derail the Trans Pacific Partnership, President Obama’s proposed trade arrangement with Vietnam and other Asian countries. DeFazio says it’s the worst and also, if approved, the last of these agreements to come before Congress. If I understood him right, he thinks it will be the last because it calls for any further trade deals to be approved without Congress having a say.

Promoters of these trade deals, DeFazio says, promise greater U.S. exports and more American jobs, but so far the opposite has been the result. In his adamant opposition to the Trans Pacific Partnership or TPP, DeFazio position is the same as Donald Trump, though nobody at the town hall pointed it out as far as I could hear.

He came with charts. One showed imports from China surging since 2001 and costing the U.S. 3.2 million jobs. China now owns so much wealth in money and assets that it has become, in DeFazio’s view, a national security concern to the United States.

DeFazio’s other visual aid was a map showing America’s most dangerous bridges. He serves on the House subcommittee dealing with federal transportation infrastructure and once was its chairman. He’s been trying to get the federal gas tax raised from its current 18.4 cents a gallon to raise money for more highway work, but he has yet to reach that goal.

DeFazio keeps hammering away at the same themes, including levying a small tax on security trades and getting the Social Security payroll tax to be collected on incomes higher than $118,500 this year. And as long as he keeps being re-elected, which is probably as long as he keeps running, maybe he’ll get what he wants one of these years. (hh) 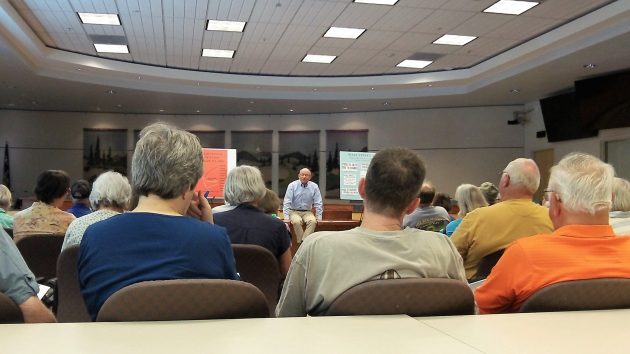 The congressman fields questions during his Albany town hall Monday.


14 responses to “30 years in Congress: Still plugging away”