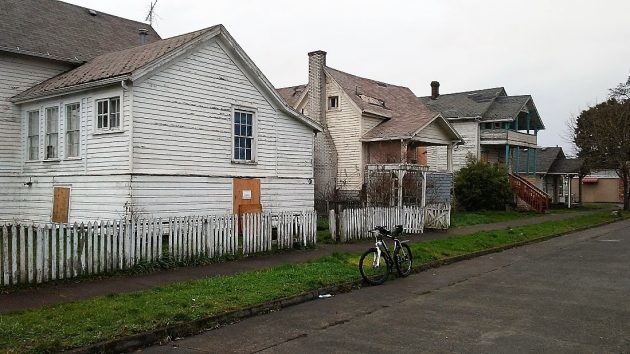 Three derelict houses in Albany’s Monteith Historic District, declared unsafe to be lived in a few months ago, have new owners who are weighing whether to fix them up or replace them with something new.

The Signs of Victory Mission had used the three houses on the northeast corner of Calapooia Street and Fourth Avenue as “transitional housing.” Conditions were so bad, though, that last Nov. 2, the city shut the houses down and boarded them up.

On Feb. 8, Mark and Tina Siegner bought the single tax lot with the three houses from the mission for $85,000. Siegner owns Valley Homes Inc., an Albany construction company.

Mark Siegner told me Saturday they’re exploring their options for the property. Demolition or restoration? “Both are being discussed.” He told me he started 30 years ago by redoing a couple of houses in the Monteith District and has a fondness for this old part of town. So whether this project ends up as a restoration or new construction, “we’ll make it look good whatever it is.”

But first things first. The places will have to be cleaned up inside, and that will happen within a month or so.

The houses were built between 1890 and 1910, if you can believe entries on the Linn County tax records. Because of the historical preservation angle, there’s a possibility that the Albany Landmarks Advisory Commission has to approve whatever is done with the exterior.

Preservation may be the wrong term, though. In their present state of disrepair, it’s hard to disagree with Siegner when he says, “They are about as ugly as can be.”

Once again, as in a similar recent case, on the northeast riverfront, tax records on this property suggest that the value of some classes of Albany property is wildly exaggerated for tax purposes.

The land in this case has a real market value of $59,330, according to the county assessor. But the so-called “improvements” are valued on the tax roll at $205,380, yielding, together with the land, a tax bill of nearly $5,000. Taxes on the property are fully paid.

The structures’ actual value, though, is probably less than zero, especially if they cannot economically be restored and must be torn down. Siegner says he’ll be speaking with the county tax people about that. (hh)

9 responses to “3 near-ruins have new owners”