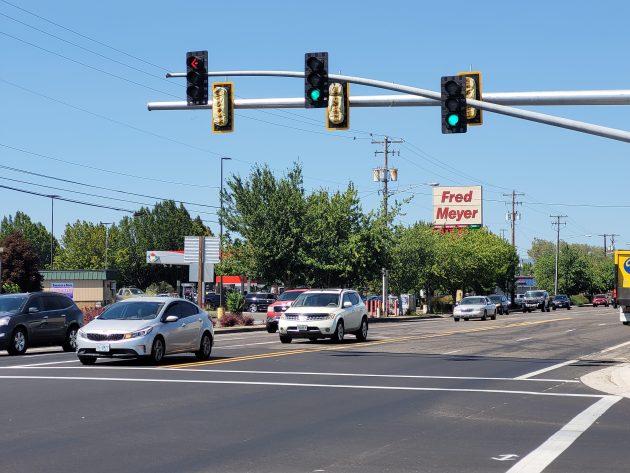 Behind the old ones, new signals have been installed on Santiam at Waverly and wait to be activated. Photo was taken Saturday.

Work on two highway safety projects in Albany seems to have stalled. The reason will sound familiar.

Here’s what a reader asked this week: “Do you think you could find out why there is the lengthy work stoppage on the ODOT projects on Pacific & Airport Way and Waverly & Santiam?  Sure would appreciate it.”

The reference was to the ODOT projects to replace traffic signals and make other changes both on Santiam Highway and on Pacific Boulevard at Airport Road.

As usual with questions for ODOT, I turned to Angela Beers-Seydel, the agency’s Eugene-based public information officer for this area.

“Supply chain issues have slowed us down,” she replied via email. “Right now signal cabinets are taking a long time to get. That’s a new issue. We try to allow plenty of time to get materials, but like for everyone else, getting some things has been unpredictable lately.”

Signal cabinets are what the term implies, apparently: the boxes that hold the electronics that make traffic lights work.

This — a delay in delivery of a signal controller cabinet — was also the problem that held up completion of traffic lights on Gibson Hill Road at Crocker Lane in North Albany in the fall of 2020. The blame in that case fell on supply shortages caused by Covid.

As for the ODOT projects on Santiam and Pacific, Beers-Seydel said, “There will be some minor work next week, and a little more the week after. We’ll get it finished up once we get the signal cabinets.”

On Santiam, in addition to the signal replacements, the project called for installation of four sections of traffic separators to prevent left turns, as well as a new signal structure at Ninth and Geary. If these have been done, I haven’t noticed them.

At Airport and Pacific, in addition to the new lights, there is to be a new left-turn lane from Airport Road. Work on the street has yet to be completed. (hh) 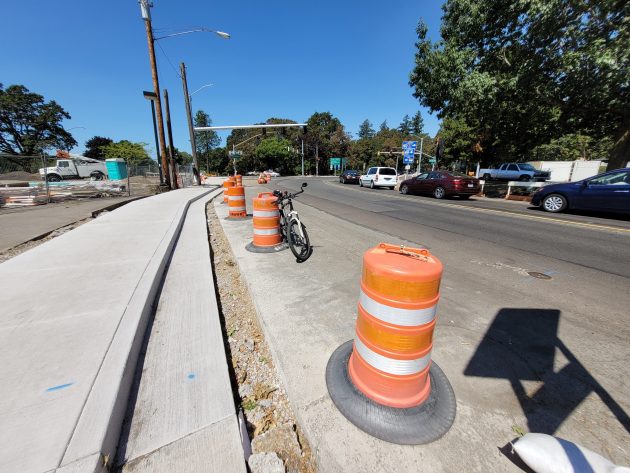 On Airport Road Saturday, looking toward the intersection with Pacific Boulevard.


9 responses to “Two Albany ODOT projects: Why the delay”