Those I-5 flags: Still tied to bridge screens 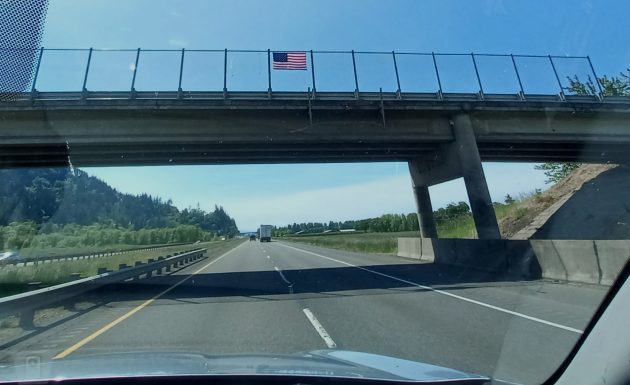 Tied to an overpass screen, this U.S. flag was seen Sunday on I-5 in Lane County. (Kathy Hering photo)

Nearly two months ago, ODOT told me its crews were removing anything including U.S. flags attached to the overpass screens on Interstate 5. But this past weekend, the flags were still there.

Among the possible explanations:

One is that ODOT’s maintenance crews have their hands full with other chores, and clearing the screens on overpasses is not high on their list.

Or, as soon as the flags are removed, somebody puts up new ones. This would keep them busy and cost them a bundle, in gas money alone, considering how many there are.

Putting flags on highway overpasses seems to have been going on all over the country, off and on, for years, as you’ll discover if you Google it.

So it wasn’t done just on I-5 or just in connection with truckers’ protest caravans in recent months.

When I first saw all those flags back in late March, I wrote about the phenomenon here.

The piece appeared on April 1 and drew an unusually large number of comments, both defending the flag display and arguing against it.

We don’t need to repeat all that. The only point here is to report that ODOT’s resolve to remove those flags either has been thwarted or it has not yet been carried out. (hh)


16 responses to “Those I-5 flags: Still tied to bridge screens”