Cumberland move: It won’t be Tuesday 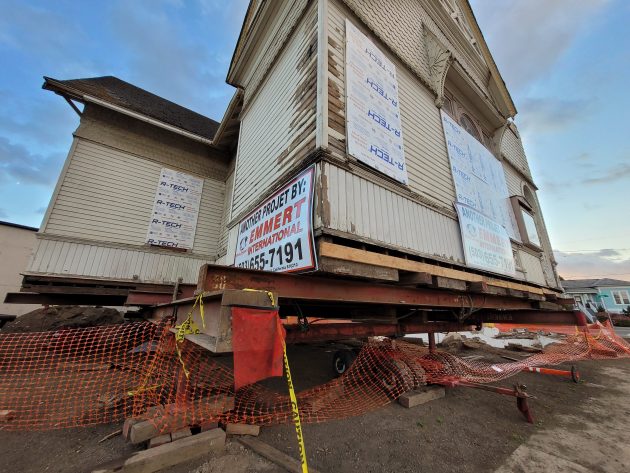 On Monday night, the former church was resting on its dollies, ready for a move that won’t happen Tuesday.

In case you haven’t heard, the moving day has once again been postponed for the former Cumberland Church in Albany.

The move, postponed several times already, had been scheduled for Oct. 12. But on its Facebook page, the Cumberland Community Events Center said it has been put off again for reasons beyond their control.

City Manager Peter Troedsson told the city council Monday the postponement had something to do with coordination with businesses on Santiam Road.

Joel Orton, vice president of the Cumberland group, explained the delay in a comment received Monday night. He said the move requires that electrical lines be taken out of service temporarily. This means the move has to be done on a Sunday when businesses along Santiam don’t need power because they are closed.

Apparently this had not been realized when previous moving dates had been scheduled on weekdays.

No new date has been set for the move.

If you were ready to go watch the move early Tuesday, about 7 a.m., forget it for now. You can sleep in. (hh)


4 responses to “Cumberland move: It won’t be Tuesday”