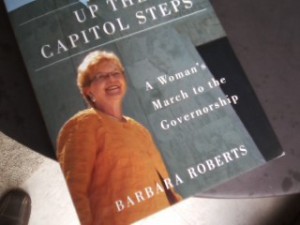 The cover of Governor Roberts’ memoir.

Barbara Roberts was our governor in Oregon from 1991 until early 1995. Before that she was a state representative  and the secretary of state. She has also held other offices, and now she’s on the board of metro, the regional government in Portland. People may know all that. Not long ago, an audience in Lebanon was reminded that Governor Roberts also is an author, and when you read her new book, her second, you gain a new appreciation of this lady’s talent not merely as a leader but as a writer too.

The book is called Up the Capitol Steps. In it the former governor, now 75, recounts her life, from growing up in the small town of Sheridan as a school girl in the 1950s through her careers as a mother, wife, political pioneer and finally as a university teacher in political science at Harvard and Portland State.

Her story in public life is one thing, and it’s obviously interesting, especially for Oregon residents who followed politics during those years. To mention just one episode, there’s the story she tells of her getting lost in Victoria’s Secret causing a brief panic among the state troopers assigned to protect her.

But her life outside of politics is even more appealing to the reader. She and the people around her have lived through a great deal, and she tells the story swiftly and in prose that is strong and clear. This, you conclude, is one tough lady who has overcome just about anything life or fate can throw at a person.

She’s still going strong, as her Lebanon audience learned. If you want to learn more, get her book. It’s “Up the Capitol Steps,” by Barbara Roberts, published by the Oregon State University Press. (hh)