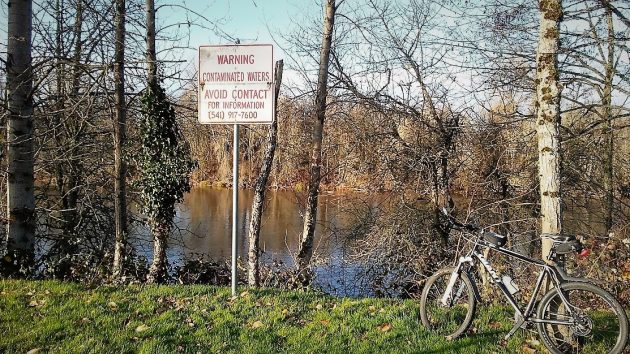 If you were tempted to go swimming in the Willamette on Dec. 18, this sign on the Dave Clark Path near the Montgomery Street outfall was meant to dissuade you.

For years, the city of Albany has posted pollution warnings near sewer outfalls on the Willamette River when heavy rainstorms overloaded the system. To fix this, the city now expects to spend $13 million borrowed from the state.

Not that anybody would be playing in the river during storms in the rainy season, when the overflows typically happen. Still, the Department of Environmental Quality frowns on the dumping of untreated wastewater. So Albany is prepared to deal with the overflows.

The problem is that the Riverfront Interceptor, Albany’s largest sewer line, 8,713 feet long and 4½ feet in diameter at its downstream, is not big enough. It was built starting in the 1950s and drains the oldest parts of town, about 1,820 acres in all.

The riverfront interceptor is a pipe deep underground near the river’s bank. Heavy rains have strained its capacity for more than 20 years. The overflows happen because of infiltration into the sewer system. This is a “standard challenge for sewer utilities,” City Engineer Staci Belcastro told the council in a memo last July.

Because of its depth and location, replacing the pipe with a bigger one would be prohibitively expensive. Instead, the city plans to build a second pipe — a force main — through which a pump would push any extra flow toward the sewage treatment plant. To pay for this, the city last February accepted a $13 million low-interest loan from the DEQ.

The pump or “wet weather lift station” and a generator will sit smack in the middle of what is now the Dave Clark Path west of the Wheelhouse parking lot. The path is supposed to be rerouted. Consulting engineers recommended that site over two others nearby because building the station there would be slightly less expensive.

The new sewer main will follow Water Avenue from the pump station to Geary Street, then jog over to Front Avenue and follow Front to the treatment plant.

In July, the council approved a $736,500 consulting contract with West Yost Associates, of Eugene, to design the project.

When it’s all done, in a couple of years or so, the DEQ should be happy. But it’s worth remembering that all this money, effort and disruption from heavy construction is to cure a temporary problem. The overflows are generally brief and heavily diluted with rainwater, flowing into a river that is already swollen with dirty runoff from thousands of acres of the Willamette Valley, at a time when boating and swimming are generally not taking place. (hh)